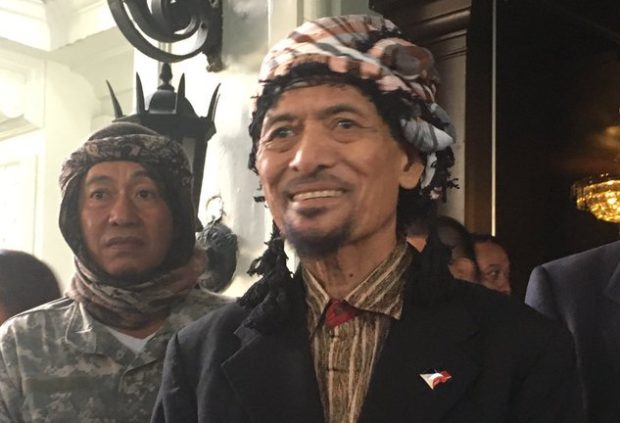 Misuari, 80, made this promise following his appointment over the weekend as the special economic envoy on Islamic affairs to the Organization of Islamic Cooperation (OIC).

President Duterte and Misuari, along with their top aides, met here Friday night, the first meeting of the newly-established government-MNLF peace coordinating committee.

Misuari said he would help in the government’s efforts to rid Mindanao of threats from terror groups, particularly on the island province of Sulu, considered an MNLF bailiwick where the Abu Sayyaf Group, founded in 1991 by the late Islamic preacher Abdurajak Janjalani, had been known to operate.

“There is no place for them to go. We can assure the President that the MNLF will fully support the resolution of this problem. Try us on how effective we are,”Misuari said in a statement released by the Office of the Presidential Adviser on the Peace Process (OPAPP).

OPAPP Secretary Carlito Galvez Jr. said the military, police and MNLF forces on the ground could establish “close coordination” efforts through the peace coordinating committee to run after the terror groups.

The Abu Sayyaf that pledged allegiance to the Islamic State had joined forces with the Maute Group in a futile attempt to establish a caliphate in Marawi City in 2017.

Misuari had been charged with rebellion and violation of international humanitarian law after MNLF fighters loyal to him staged the 2013 Zamboanga standoff that left 137 persons dead, 251 injured and over 100,000 civilians displaced.

Misuari ruled as ARMM regional governor from Sept. 30, 1996 until he left Sulu for Sabah, Malaysia, in November 2001 after leading the rebellion. He was arrested there and returned to the country in January 2002.

He is still facing charges of rebellion and corruption, but the court gave him temporary liberty in October 2016 “to allow him to attend peace talks with the government.”