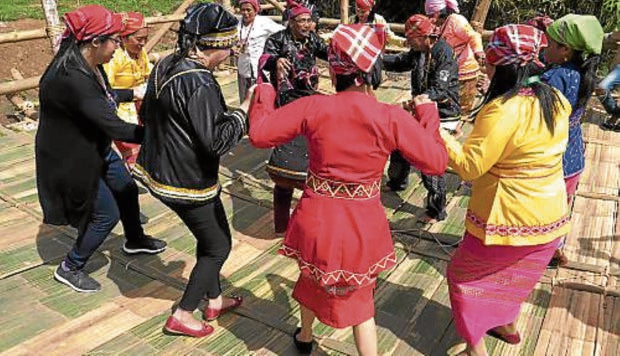 COMMUNITY DANCING Members of the Subanen tribe dance on the flexible platform called “buklogan” in the traditional “gbat” event. —PHOTO COURTESY OF THE NATIONAL COMMISSION FOR CULTURE AND THE ARTS

MANILA, Philippines — The son of a Subanen chieftain remembers it well: a two- to three-day feast that’s as much a rousing celebration as it is a solemn thanksgiving ritual, a discreet courtship dance, and a chance to partake of well-loved childhood delicacies, like fried rice cakes called panyalam.

Called Buklog, or more accurately, Boklog, the elaborate rite was recently added by the United Nations Educational, Scientific and Cultural Organization (Unesco) to its list of Intangible Cultural Heritage in Need of Urgent Safeguarding to prevent it from being forgotten.

Being on the list would help “mobilize attention and international cooperation,” including financial support, to ensure that the cultural practice remains viable despite modern-day threats.

Inquirer photographer Edwin Bacasmas, whose late mother was a chieftain of this indigenous tribe on the Zamboanga Peninsula, recounts that the Buklog usually starts with the community gathering dulugan, springy wood from an eponymous tree that is now rare, from the surrounding forest to build a trampoline-like platform called buklogan.

The buklogan, built with branches of dulugan held together with strips of rattan, can support a lot of weight and produces a bounce that keeps the platform from breaking when people mount it for community dancing known as gbat, Bacasmas says. But as dulugan has become rare, bamboo is now more commonly used in building the buklogan, with people taking turns dancing on what is considered sacred and social space.

As people dance on the buklogan, others watch and cheer from the ground, Bacasmas says. All this, he says, while agong and kulintang music is played to appease the spirits.

Also believed pleasing to the spirits is the booming sound produced by the phetaw, a strong wooden pole beneath the center of the buklogan, when it hits a hollowed-out log half-buried in the ground as the platform sags under the weight of the dancers.

According to Unesco, the community dance marks the renewal of spiritual and social relationships. It says the Buklog, after all, is meant to ensure harmony among family, clan and community members, as well as among the human, natural and spiritual worlds.

The ritual is also done to give thanks for a good harvest or for recovery from illness; welcome a new village chief called timuay; appease the spirits when a family member gets sick, or honor the dead. It may also be performed to “ask the spirits for permission to gather materials from the forest, present coin offerings, invite the spirits of the departed to the feast, or invoke the spirits of water and land, as well as music and dance,” Unesco says.

The ritual is usually done in the chieftain’s house, Bacasmas says. The head of a host family, usually the village chief, plans the ritual while the spiritual leader called balyan presides over the ceremony.

Unesco says the ritual is the community’s strongest unifying force, but social, political and economic threats have compromised its viability, including the “influx of other cultures into the Subanen’s traditional homeland, changes in family dynamics, and economic constraints.” While the Subanen “have developed highly adaptive mechanisms to ensure that their culture survives,” it says, “the Buklog is now regarded as highly vulnerable.”