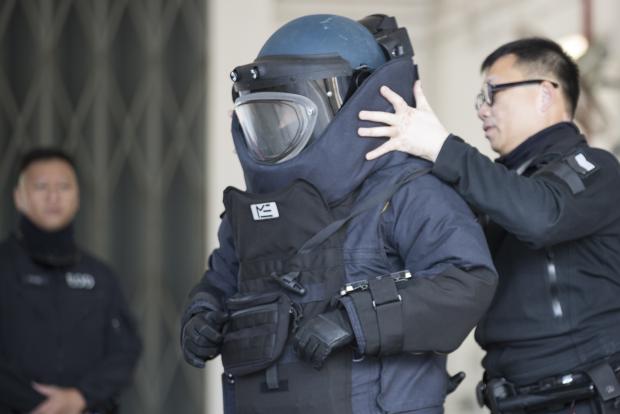 A police officer from the bomb disposal squad putting on protective gear during a demonstration for media in Hong Kong, Friday, Dec. 6, 2019. Hong Kong’s much-maligned police force provided a rare behind-the-scenes look Friday at its bomb disposal squad to show the potentially deadly destructive force of homemade explosives seized during months of protests that have shaken the Chinese territory. (Photo by VINCENT THIAN / AP)

HONG KONG — Hong Kong police said they arrested three men Saturday for testing homemade explosives that they suspect were intended for use during protests.

The arrests are the latest in a rash of explosives-related cases police say they’ve uncovered since protests erupted in June over a proposed extradition law and snowballed into an anti-government movement.

On Monday, police said they defused two homemade bombs packed with nails. Police suspect they may have been intended for use against officers. Police said the bombs were to be triggered with cellphones.

In July, police announced the seizure of about 2 kilograms of TATP, which has been used in militant attacks worldwide. Other recent seizures involved smaller amounts of the explosive.

Read Next
Shabu seized, 3 suspects held in Zamboanga buy-bust
EDITORS' PICK
PH preps for China virus: Question of when, not if
Beyond water service: Maynilad builds massive infrastructure projects to clean up Metro Manila waterways
Museums ‘put to sleep,’ churches closed amid volcano’s unrest
Seventh judge assigned to handle De Lima case
SM continues to send relief assistance to remote towns in Batangas
Get exciting deals and discounts when you download the new McDonald’s App
MOST READ
Taal Volcano flexes signs of restiveness anew
Passengers from Wuhan, China to be flown out of Kalibo, Aklan – CAAP
Part of Aurora Boulevard in Cubao closed from Jan. 25 – Feb. 1
Lacson on Duterte’s threat to end VFA over Bato’s canceled visa: Where is the connection?
Don't miss out on the latest news and information.