Ramos to Duterte: Gov’t gave its word in water deals 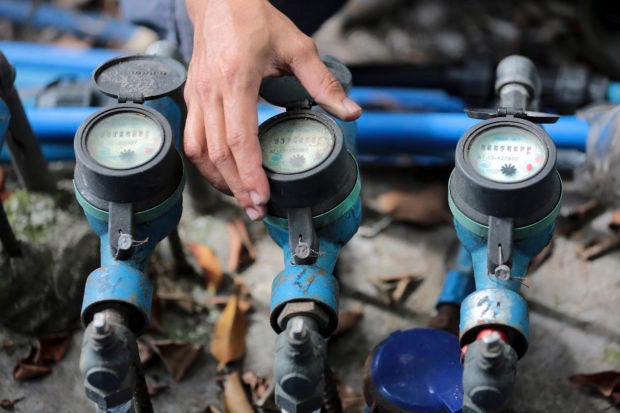 ‘OUR WORD MUST BE OUR BOND’ In a Dec. 4 letter to President Duterte, former President Fidel V. Ramos defends the 1997 water concession agreements forged during his term, saying that “as with all projects and agreements entered into by government during my administration, [they were] anchored on complete staff work, review and consultation with various government agencies, organizations and the concerned public, which resulted in complete transparency all the while negotiating terms most favorable to government.” —PHOTO BY GRIG C. MONTEGRANDE

Former President Fidel V. Ramos has vouched for the integrity of his administration’s water concession agreements with two of the country’s biggest conglomerates, which had angered President Duterte who said they contained onerous provisions.

In a Dec. 4 letter to the President, a copy of which was obtained by the Inquirer on Friday, the 91-year-old Ramos recalled that the privatization of the Metropolitan Waterworks and Sewerage System (MWSS) in 1997 and the concession agreements were designed to provide water and sanitation to the sprawling Philippine capital, “which at that time was facing a water crisis.”

First of its kind

“The success of this agreement has brought about an infusion of capital to upgrade the infrastructure necessary to improve the efficiency and service coverage to the end users. In Metro Manila alone, more than 18 million Filipinos (from only 10 million in 1997) now have access to sustainable water supply,” Ramos said.

The former president added that the privatization and its concession agreements were recognized as the first of its kind in Asia and viewed as an example by other countries.

“To achieve all this, the private sector mobilized funding from both foreign and local sources depending on the word of the Philippine government that the essential conditions of adherence to the sanctity of contracts and rule of law must be observed,” Ramos said.

In a cautionary note, he added: “These are the pillars that hold together any agreement, be it between governments and/or the government and the private sector. Our word must be our bond.”

The privatization of the MWSS came two years after the passage of Republic Act No. 8041, also known as the National Water Crisis Act of 1995.

The primary objectives of the privatization were to transfer the financial burden of providing water to the private sector, improve service standards, increase operational efficiency and minimize tariff impact. The government then entered into separate 25-year concession agreements with two private consortia comprised of local and international partners.

This effectively transferred the operational responsibilities of MWSS to Manila Water Co. Inc. (for the east zone) operated by the Ayala group, and Maynilad Water Services Inc. (for the west zone) of the Lopez group. In 2008, the Pangilinan group’s Metro Pacific took over Maynilad.

“Before 1997, the MWSS was unable to fulfill its mandate, which resulted in poor service to the public, water loss of around 65 percent not to mention decades of underinvestment and mounting government debt in excess of $1 billion,” Ramos said.

“The MWSS concession agreement, as with all projects and agreements entered into by government during my administration, was anchored on complete staff work, review and consultation with various government agencies, organizations and the concerned public, which resulted in complete transparency all the while negotiating terms most favorable to government.”

In a series of tirades against Maynilad and Manila Water last week, Mr. Duterte threatened to scrap the concession deals altogether and vowed that the government would not pay nearly P11 billion in awards given to the two companies by the international arbitration tribunal in Singapore for their losses because the MWSS refused to allow them to raise water rates.

Despite conciliatory moves by the two companies, including waiving the tribunal’s awards, deferring a planned water rate increase on New Year’s Day and agreeing to renegotiate the concession agreements, the President continued his verbal attacks against them.

In another tirade on Thursday night during the birthday celebration of former Sen. Manny Villar, Mr. Duterte threatened a military takeover of the water companies and to charge them with “economic sabotage.”

“You sons of bitches, you’re not an entity to me,” he said. “If you fool with me, you fool with the Filipino people. I will suspend the writ of habeas corpus and I will arrest all of you because I want to see billionaires in jail.”

“They say that all these years … where’s the big fish? Here, we have these two crocodiles,” he added.

He said he would not talk with the two companies, who should instead negotiate with MWSS administrator Emmanuel Salamat, a retired Marine general.

“Me? I will just prepare the charges. If we do not reach an understanding here, [the charges will be] economic plunder, then there is no bail,” he said.

Malacañang on Friday pressed on the attack, with presidential spokesperson Salvador Panelo saying Manila Water and Maynilad “can do their worst and continue with fleecing the consumers while the President will do his best in serving and protecting the interest of the people.”

“The concessionaires are put on notice that the Chief Executive will not renege [on] his constitutional duty of enforcing the law,” he said in a statement.

He was reacting to alleged threats by the two concessionaires to raise water rates “by 100 percent” after the MWSS decided on Dec. 5 to revoke the extension of their concession deals, which would end in 2022, to 2037. The renewal was approved in 2009 by then President Gloria Macapagal-Arroyo.

Executives of the two companies had objected to the “unilateral decision” and warned that it could lead to “significantly high” water rate hikes.

He said the President had neither accepted nor rejected their offer, which was still under review.

“An examination of the [antigraft law] reveals that the contracts are on all fours with it. Stated differently, the agreements violate every prohibited act of the law,” Panelo added.

In his letter, Zobel reiterated that Manila Water would not collect the P7.39-billion award by the arbitral tribunal. Maynilad had earlier promised to give up its P3.4-billion award.