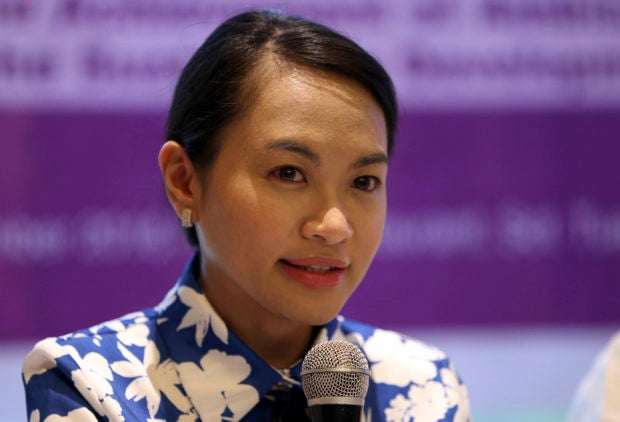 A top justice department official has been told by Justice Secretary Menardo Guevarra not to take part in the review and a planned renegotiation of the 1997 concession agreements with Manila Water Co. Inc. and Maynilad Water Services Inc. to avoid suspicions of conflict of interest.

She was appointed to the Department of Justice (DOJ) in July last year.

Guevarra on Friday said Villar had acted professionally in the evaluation of the concession agreement, but admitted asking her to inhibit nevertheless “to dispel suspicions” of bias.

“I requested Usec Villar to just inhibit herself to dispel suspicions that the DOJ contract review may not be completely objective due to an alleged possible conflict of interest,” he said in a text message to reporters.

“It’s unfair to Usec Villar who has always acted with professionality, but the circumstances call for it. One thing I can say, any good lawyer will come to the same findings and conclusion” that the concession agreement contained onerous provisions, he added.

Villar on Friday informed Gueverra that she was withdrawing from the DOJ’s review panel.

“To eliminate any cloud of doubts on the impartiality of the department’s review and renegotiation of the water concession agreements with the Metropolitan Waterworks and Sewerage System (MWSS) that my affinity to the owners of PrimeWater Infrastructure Corp. has brought, I am inhibiting from any involvement in the department’s review and renegotiation of the said agreements,” she said in a letter to the justice secretary on Dec. 13.

Villar’s participation in the DOJ-led review raised questions of conflict of interest after President Duterte suggested that the Villar family was capable of handling water services in Metro Manila when he lambasted Manila Water and Maynilad last week for their alleged onerous deals with the state-run MWSS.

Sen. Cynthia Villar, the justice official’s mother-in-law, played down any role by their company, telling reporters earlier this week that operating a water concession, like any other business, had to first be studied. “Whoever will manage [the business] will have to make the study. Why should I do the study for them? I’m a senator. I will just do the best I can being a senator,” she said.

Guevarra has said the government wanted to amend the agreement with Manila Water and Maynilad to remove about a dozen provisions that the DOJ found onerous.

Chief among them was a provision barring the government from interfering in setting water rates and one indemnifying the concessionaires for losses in case of such interference.

A provision allowed the water companies to pass on their corporate tax obligations to consumers and another charged consumers for various company expenses not directly related to water distribution.

The DOJ also said the extension of the concession agreements to 2037 was irregular because it was negotiated in 2009, years before they were to terminate in 2022.