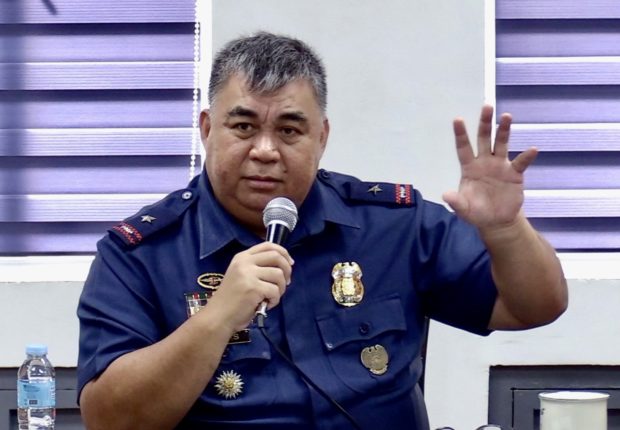 In a statement, Paul Gutierrez, chairman of NPC Press Freedom Committee and Vice President, said the reporter was asking Sinas about the inspection but the Metro Manila police acting chief turned her down and asked to do the interview later.

Sinas then covered the reporter’s face with his hand while the latter was still talking, Gutierrez said.

(The journalist was still talking when Sinas covered her face before he turned his back and left the area.)

When the reporter tried to reach out to Sinas, the acting Metro Manila police chief told the journalist: “Hindi ba sinabi ko sa iyo, mamaya ka na at mag-isa ka palang [Didn’t I tell you to have the interview later because you are the only one here.]”

With this, Gutierrez said the reporter was embarrassed and vacated the area.

In another statement, the National Capital Region Police Office (NCRPO) said they were saddened over the allegation against Sinas. However, they said it was the reporter who interrupted the conversation between Sinas and some officials.

“We are saddened by the information that [one reporter] allegedly felt stifled by PBGEN SINAS earlier this morning during the initial walkthrough,” read the statement.

“In reality, the media personality interrupted the ongoing conversation between  PBGEN SINAS,  Monsignior Hernando Coronel, the Head of Quiapo Church, Mr. Alex Limbaga and Nazareno hijos with regard to the upcoming traslacion,” it added.

The NCRPO said the reporter “butted-in without permission in the middle of the conversation.”

The NCRPO said Sinas “never intended to stifle said reporter or any person for that matter.”