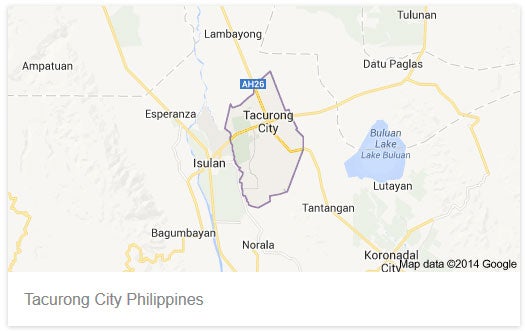 Egos said Dr. Omar Shariff Acob, driver of the SUV, and Brent Nicole Cerebo, 20, driver of the pickup truck, admitted they were under the influence of liquor.

Cerebo and his three other companions in the pickup truck were injured while one of the three passengers of Acob in the SUV died on the spot. He was identified as Atong Untong, 29, of President Quirino town in Sultan Kudarat province.

“They admitted they were under the influence of liquor and were heading to Pres. Quirino from a Christmas party when the accident happened,” Egos told reporters.

Witnesses told police the SUV and pickup truck were speeding and the drivers did not notice a tricycle along Alunan Avenue, Tacurong City that they hit from behind.

“The impact was powerful that the motorbike was separated from the tricycle loaded with a family of eight persons,” Egos said.  A couple on board another tricycle was also injured and is now getting medical attention.

Acob and Cerebo are both detained at Tacurong City traffic management office while charges for reckless imprudence resulting to homicide, injuries and damages to properties are being prepared against them.

Also killed on the spot was Atong Untong, 19, a resident of Pres. Quirino and a passenger of the SUV.

Following the mishap, Egos reminded motorists not to drive when under the influence of liquor “because it may cost others’ lives, and yours, too.”

He also reminded tricycle drivers not to stay near the centerline of the highway since it is for fast moving vehicles.  “Slow moving vehicles, tricycles included, should stay in the outer right most part of the lane to avoid accident.”

The victims who died have been buried according to Islamic tradition.