U2 in Manila: Elevation of Pinay power, freedom of the press | Inquirer News
Close
menu
search

U2 in Manila: Elevation of Pinay power, freedom of the press 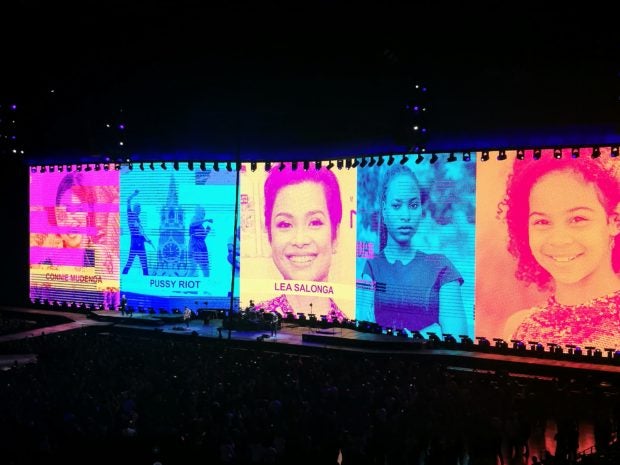 ‘HERSTORY’ U2 pays tribute to women who have made an impact on politics, protest movements, LGBTQ, women’s and civil rights, literature, music, business and sports in the “Herstory” segment of its concert at Philippine Arena on Wednesday. Pictures of the women are flashed on the giant screen on the background as the band plays “Ultraviolet.” Among the Filipino women cited in the segment is theater actress Lea Salonga. –POCHOLO CONCEPCION

Irish superstar rock band U2, the biggest contemporary music group to perform in the country since The Beatles in 1966, went beyond mere entertainment when it recognized 12 Filipino women and activist groups in a special segment called “Herstory” at its concert at Philippine Arena on Wednesday.

Said to be an idea of U2 frontman Bono, “Herstory” was a montage of photos of women around the world who had made an impact on politics, protest movements, LGBTQ, women’s and civil rights, literature, music, business and sports.
The photos were flashed on the enormous video screen backdrop onstage as U2 played “Ultraviolet” (Light My Way), a track from the band’s 1991 album “Achtung Baby.”

The song was performed near the end of the three-part show that went for almost three hours.

Carpena, known during her time as the “Nightingale of Zarzuela,” was the least known among the Filipino women in “Herstory” and the choice of her image for the show surprised Mayor Arlene Arcillas of Santa Rosa City in Laguna, the artist’s hometown.
“We are very proud and happy [Carpena] was included,” Arcillas said on Thursday.

Explaining Bono’s idea, U2 creative director Willie Williams said on the band’s website: “The thought was that we are currently living in a time when we could really use a more feminine spirit in our leadership, and a way to illustrate this might be to celebrate some of the great female pioneers of the past.”

“Herstory” was actually a brainchild of multimedia artist Alice Wroe, whose project “combines feminist art, education and activism to engage people of all genders in celebrating women’s history—particularly women who have been left out (systematically or otherwise) of the traditional, historical canon.”

‘Beautiful Day’
Cheers rose as the images of Pinoy power unfolded before an estimated 50,000 people at the venue, recognized as the world’s biggest indoor arena.
Early in the concert, on the fourth song, “Bad,” the band played snippets of David Bowie’s “Heroes” as Bono cited “everyday heroes,” including

volunteers at Philippine Red Cross and “journalists, the truth tellers.”

Again, Bono mentioned the importance of press freedom in between the last few songs, putting “Beautiful Day” in context: “When journalists don’t have to worry about what they write, that is a beautiful day.”

U2 fans braved the trip from Manila to Bocaue in Bulacan province that took two hours for some, while traffic getting out of the venue after the concert took three hours, said a journalist who decided to kill time before heading home by hanging out at a tent of the show’s sponsor Smart Communications. —WITH A REPORT FROM MARICAR CINCO