P460K-worth of ‘shabu’ seized in Laguna, suspect slain in buy-bust 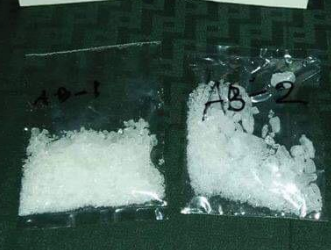 SAN PEDRO CITY–A suspected drug pusher was killed in a buy-bust operation in Lumban town in Laguna province on Thursday.

According to Matta, police went undercover to buy a sachet of “shabu” (crystal meth) from Brosas in an operation around 1:45 a.m. along the national road in Barangay Lewin, Lumban.

During the transaction, Brosas allegedly drew a .45 gun and shot the police, prompting authorities to shoot him down.

Police recovered from the slain suspect 14 more sachets or about 75 grams of suspected shabu worth P460,000.

He was previously arrested for drug charges and had spent five years at the Laguna Provincial Jail.

Read Next
Missouri teacher placed on leave for asking students to ‘set your price for a slave’
EDITORS' PICK
China expands lockdown against virus, fast-tracks hospital
SM continues to send relief assistance to remote towns in Batangas
‘A greener, cleaner tomorrow’: A how-to guide for Filipinos who want to help with today’s energy crisis
Palace: US Senate move also made Duterte junk VFA
Get exciting deals and discounts when you download the new McDonald’s App
Countries with confirmed cases of coronavirus
MOST READ
Taal’s sulfur dioxide emission increases
No time for revelry; Tagaytay instead plans for alert level 5
Palace: US Senate move also made Duterte junk VFA
Dina Bonnevie on Coney Reyes: We have forgiven each other
Don't miss out on the latest news and information.