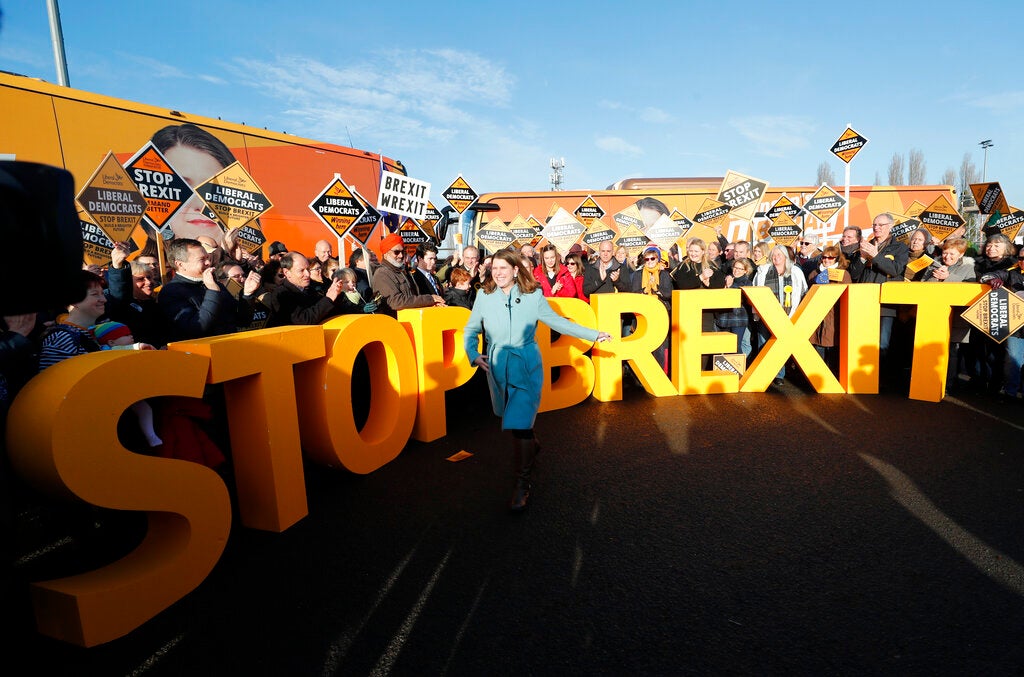 LONDON — Britain’s election has been like the country’s late-autumn weather: chilly and dull, with blustery outbursts.

On the last day of the campaign, political leaders dashed around the U.K. on Wednesday trying to win over millions of undecided voters who will likely determine the outcome.

Opinion polls suggest Prime Minister Boris Johnson’s Conservatives have a lead over the main opposition Labour Party led by Jeremy Corbyn ahead of Thursday’s election. But all the parties are nervous about the verdict of a volatile electorate fed up after years of Brexit wrangling.

Truck driver Clive Jordan expressed a weariness that could be heard up and down the country during the five-week campaign.

“Basically I just want it over and done with now,” he said. “Nobody’s doing what they said. Everybody’s lying.”

Britain’s first December vote since 1923 has been dubbed the Brexit Election. It is being held more than two years early in hopes of breaking Britain’s political deadlock over the country’s stalled departure from the European Union.

Johnson has focused relentlessly on Brexit throughout the campaign, endlessly repeating his slogan “Get Brexit done.” He says that if he wins a majority of the 650 House of Commons seats on Thursday, he will get Parliament to ratify his “oven-ready” divorce deal with the EU and take Britain out of the bloc as scheduled on Jan. 31.

“If we can get a working majority, we have a deal, it’s ready to go,” Johnson said Wednesday as he watched pies being baked at a catering firm in central England. “We put it in, slam it in the oven, take it out and there it is — get Brexit done.”

As a slogan, “Get Brexit done” is both misleading and effective. If Britain leaves the EU on Jan. 31 it will only kick-start months or years of negotiations on future trade relations with the bloc, involving tough trade-offs between independence and access.

“His campaign was all about ‘Getting Brexit done,’ but actually it’s about getting Brexit started,” said Tony Travers, professor of government at the London School of Economics. “Elections seem to suggest these things are easy; they’re not.”

But the notion of an end to the Brexit melodrama is tempting to voters who have watched politicians bicker for more than three years since Britain’s June 2016 vote to leave the European Union.

“Brexit is fueling the election,” said Allan Bailey, a parish councilor in Clowne, a former coal-mining village in the central England constituency of Bolsover. “If one person can offer this area … Brexit, that person will win.” 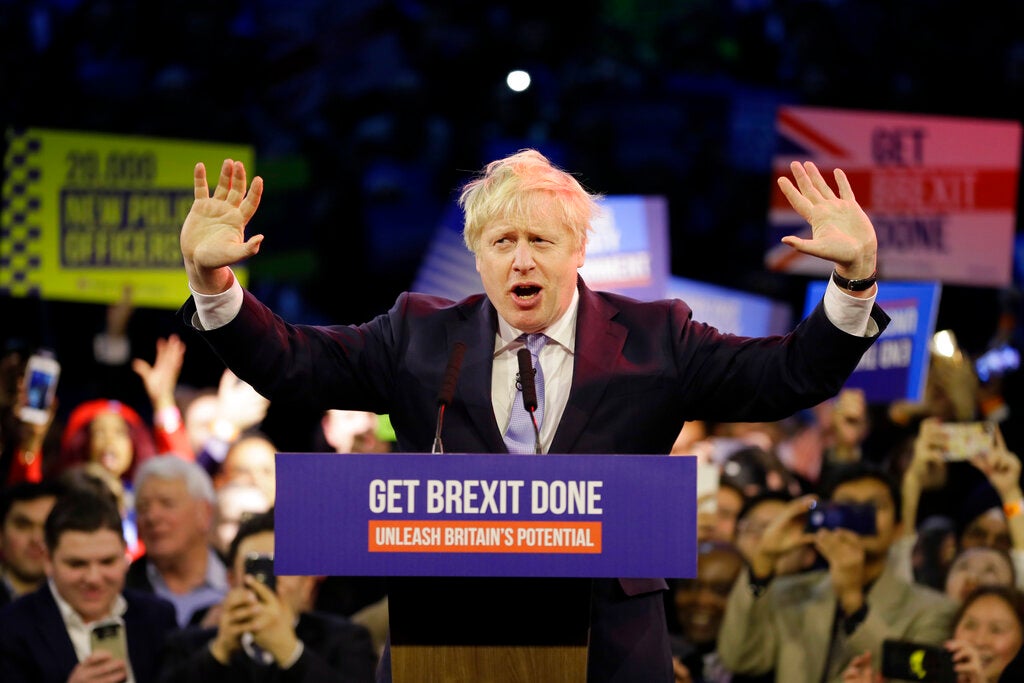 The Conservatives have focused much of their energy on trying to win seats like Bolsover — working-class towns in central and northern England that have elected Labour lawmakers for decades, but also voted strongly in 2016 to leave the EU.

Polls suggest that plan may be working, and the Conservatives have also been helped by the Brexit Party led by Nigel Farage, which decided at the last minute not to contest 317 Conservative-held seats to avoid splitting the pro-Brexit vote.

Labour — which is largely but ambiguously pro-EU — faces competition for anti-Brexit voters from the centrist Liberal Democrats, Scottish and Welsh nationalist parties and the Greens.

“The only reason the Conservatives are so far ahead in the polls now is that the ‘remain’ vote is divided,” said Rosie Campbell, professor of politics at King’s College London. “For ‘remain’ voters it has been a real failure of leadership.”

If the Tories fail to win a majority, it will be a sign that voters think other issues are just as important as Brexit. Labour has focused on domestic issues, especially the wear and tear to the country’s state-funded health service after nine years of Conservative government austerity. Labour also promises to boost public spending, nationalize Britain’s railways and utilities and provide everyone in the country with free internet access — all paid for by raising taxes on high earners.

“My message to all those voters who are still undecided is that you can vote for hope in this election,” Corbyn said Wednesday at his final campaign rally.

On Brexit, Labour says it will negotiate a new divorce deal with the EU, then offer voters the choice in a new referendum between leaving on those terms and remaining in the bloc.

For many voters, Thursday’s election offers an unpalatable choice. Both Johnson and Corbyn have personal approval ratings in negative territory, and both have been dogged by questions about their character.

Johnson has been confronted with past broken promises, untruths and offensive statements, from calling the children of single mothers “ignorant, aggressive and illegitimate” to comparing Muslim women who wear face-covering veils to “letter boxes.”

Corbyn has been accused of allowing anti-Semitism to spread within the party. The 70-year-old left-winger is portrayed by opponents as an aging Marxist with unsavory past associations with Hamas and the IRA.

Though the candidates claim to carry positive messages, the campaign has been littered with allegations of mudslinging and dishonesty — largely by the Conservatives. The Tories doctored a video of an interview with a senior Labour lawmaker to make it appear as if he had failed to answer a question, when he had. The party re-branded its press office Twitter account “FactCheckUK” during a television debate, earning a warning but no sanction from the social media site.

Johnson combined an aggressive online campaign with a cautious approach to live appearances. He largely avoided tough interviews — to the fury of opponents — and had a generally gaffe-free election until the final days of the campaign.

On Monday, Johnson was caught making a ham-fisted and seemingly unsympathetic reaction to a picture of a 4-year-old boy lying on a hospital floor because no beds were available. Asked to look at the picture on a reporter’s phone, Johnson grabbed the device and pocketed it.

On Tuesday, the father of a man killed in last month’s knife attack near London Bridge accused the prime minister of using his son’s death for political gain.

It’s unclear how much those moments will influence the outcome when Britain’s voters pass their verdict on Thursday. Polls are open from 7 a.m. to 10 p.m. (0700GMT to 2200GMT), with most results expected early Friday.