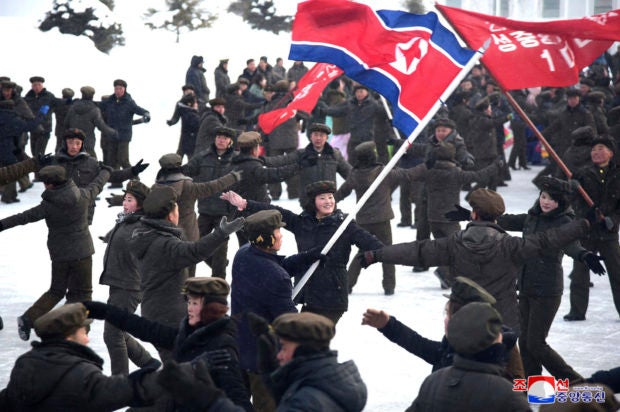 In this Monday, Dec. 2, 2019, photo provided Tuesday, Dec. 3, 2019, by the North Korean government, people dance to celebrate the completion of Samjiyon city. On Monday, North Korean leader Kim Jong Un visited Samjiyon county at the foot of Mount Paektu to attend a ceremony marking the completion of work that has transformed the town to “an epitome of modern civilization,” KCNA said. It said the town has a museum on the Kim family, a ski slope, cultural centers, a school, a hospital and factories. Independent journalists were not given access to cover the event depicted in this image distributed by the North Korean government. The content of this image is as provided and cannot be independently verified. Korean language watermark on image as provided by source reads: “KCNA” which is the abbreviation for Korean Central News Agency. (Korean Central News Agency/Korea News Service via AP)

She told the U.N. Security Council that the U.S. is “prepared to be flexible” and remains ready to take concrete, parallel steps with North Korea toward an agreement.

But “its continued ballistic missile testing is deeply counterproductive to the shared objectives” that U.S. President Donald Trump and North Korean leader Kim Jong Un have discussed at their two summits, Craft said.

North Korea has carried out 13 ballistic missile launches since May.

“These actions also risk closing the door on this opportunity to find a better way for the future,” Craft said. The tests violate Security Council resolutions, she said, as some other council members have previously.

She said the U.S. trusts that North Korea will stop “further hostility and threats” and engage with Washington. But if not, she said the Security Council must be “prepared to act accordingly.”

North Korea was not scheduled to speak at the meeting. Key ally China called on Washington and Pyongyang to work together to keep tensions from escalating and nurture the rapprochement they had made over the last two years.

“Seize the hard-earned opportunity,” Chinese Ambassador Zhang Jun said, calling on the two sides “to prevent the dialogue process from derailing or backpedaling.”

The meeting came less than three weeks before Kim’s end-of-December deadline for the U.S. to come up with new proposals to revive nuclear diplomacy.

Negotiations faltered after the U.S. rejected North Korean demands for broad sanctions relief in exchange for a partial surrender of the North’s nuclear capabilities at the leaders’ second summit last February. North Korea has hinted at lifting its moratorium on nuclear and long-range missile tests if the Trump administration fails to make substantial concessions before the new year.

Beyond its slew of ballistic missile launches in recent months, the North on Sunday it said it had performed a “very important test” at its long-range rocket launch site. South Korea’s defense minister said Pyongyang tested a rocket engine. He did not elaborate, but there is wide speculation that the test involved a new engine for either a space launch vehicle or a long-range missile.

The United States holds the Security Council presidency this month, and some diplomats have been puzzled at its refusal to sign a letter that would have authorized the Security Council to hold a meeting on the human rights situation in North Korea — after it said it would.

Without U.S. support, diplomats said European and other countries that wanted the U.N.’s most powerful body to discuss human rights in North Korea were one vote short of the number they needed to go ahead with a meeting. It had been expected Tuesday.

Asked about the human rights issue on her way into the meeting, Craft said: “Human rights is every day, for me.”

The Security Council discussed the human rights situation in North Korea from 2014 through 2017, but skipped 2018.

Louis Charbonneau, the U.N. director for Human Rights Watch, said the U.S. had prevented council scrutiny of North Korea’s “abysmal” rights record for a second year in a row, “sending a clear message to Pyongyang and other abusive governments that the U.S. is prepared to look away regarding rights violations” including arbitrary detention, starvation and torture.

“Kim Jong Un and other senior North Korean officials will undoubtedly be elated they can duck U.S. criticism of their human rights record once again this year,” Charbonneau said.

U.N. General Assembly resolutions have condemned the human rights situation in North Korea, and its rights record has been sharply criticized by a U.N. special investigator.

The assembly’s human rights committee unanimously approved a draft resolution last month condemning North Korea for “ongoing systematic, widespread and gross violations of human rights,” including those that a U.N. commission of inquiry says may amount to crimes against humanity.

The 193-member General Assembly is virtually certain to adopt the draft resolution later this month.

North Korea’s U.N. ambassador, Kim Song, sent a letter to all Security Council members except the U.S. last week warning that holding a meeting on its human rights would be “another serious provocation” resulting from America’s “hostile policy.” Kim said a meeting would increase tensions on the Korean Peninsula, and the North would “respond strongly to the last.”

The council did not issue any statement, but its five European members and Estonia, which will join the group in January, condemned North Korea’s “provocative” ballistic missile launches since May, saying they violate Security Council resolutions and undermine regional and international security.

The Europeans again urged North Korea “to engage in good faith in meaningful negotiations with the United States aimed at denuclearization.”

Ambassador Kim followed up with a statement Saturday saying that denuclearization — a key U.S. demand — is off the negotiating table, and that his country doesn’t need to have lengthy talks with the United States.

The U.N. envoy’s comments follow other recent North Korean statements indicating that prospects are dim for a resumption of U.S.-North Korea nuclear diplomacy.

Trump considers the opening of talks with North Korea a foreign policy achievement, and U.S. officials have indicated he would like to see Kim Jong Un abandon nuclear weapons before the 2020 election.