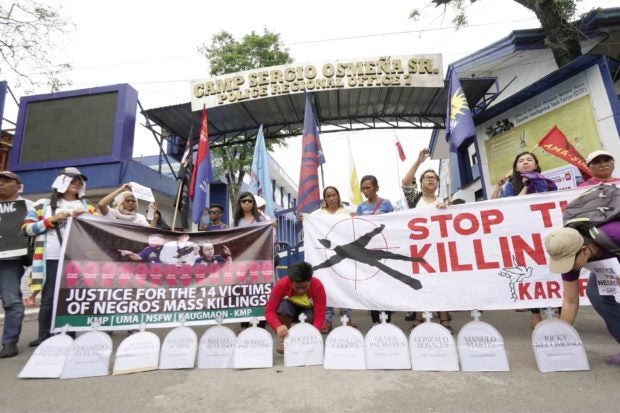 In this photo taken in April 2019, militant groups gather in front of the Central Visayas Police Regional Office in Cebu City to denounce the killing of 14 people, most of them farmers, in police and military operations in Negros Oriental province on March 30. (Photo JUNJIE MENDOZA / Inquirer Visayas)

From Jan. 1 to Nov. 3o, 2019, a total of 50 killings related to land disputes were reported in the Philippines, which roughly translates to one Filipino land defender killed every week, according to PANAP’ year-end report, titled “Land and Rights Watch 2019.”

“This rate of death toll outpaces last year’s frequency of one land defender murdered every two weeks in the Philippines,” the group noted.

This is the third straight year that the Philippines had the most number of cases and victims of killings related to land disputes.

Based on PANAP’s monitoring, the killings were concentrated in the Philippines (38 cases, 50 victims); Colombia (21 cases, 27 victims); and Brazil (seven cases, nine victims).

Of those killed by unknown assailants, most were from Colombia (25 victims), followed by the Philippines (22 victims), and then Brazil (8 victims).

All but two victims of land-related killings in Colombia and one in Brazil were taken out by an unidentified attacker.

In the Philippines, PANAP said most of the monitored killings were allegedly carried out by state forces as the government stepped up its counterinsurgency campaign.

The PANAP report cited the massacre of 14 farmers in Negros Oriental in the guise of the government’s counterinsurgency operations.

“The climate of impunity created by such smear campaigns clears a fertile ground for not only killings but also legal persecution of groups supportive of peasant and workers’ causes,” the group said, citing the arrest of 57 activists and community leaders during the raid on the offices of progressive organizations in Negros Occidental last Oct. 31.