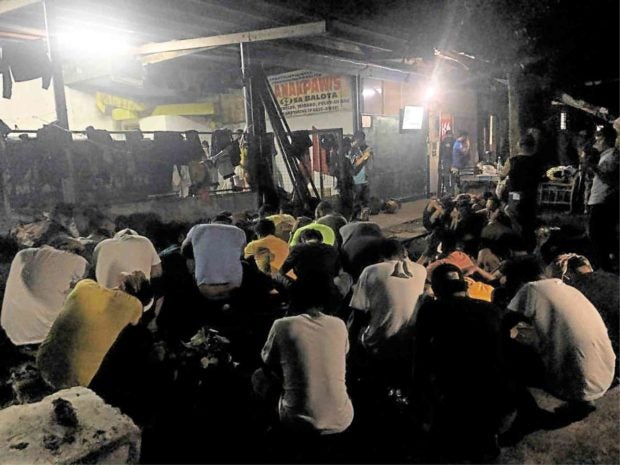 ROUNDUP Policemen and soldiers guard the members of progressive groups they rounded up in simultaneous raids on their offices in Bacolod City on the eve of All Saints’ Day. —CONTRIBUTED PHOTO

BACOLOD CITY—Police and soldiers arrested 57 people, including 15 minors, in simultaneous raids on offices of progressive groups in this provincial capital and in Escalante City beginning Thursday night, the eve of All Saints’ Day.

Fifty-five were collared in raids conducted on the offices of Bagong Alyansang Makabayan (Bayan), Kilusang Mayo Uno (KMU) and Anakpawis, located in one compound on Ilang-Ilang Street, Barangay Bata; the Gabriela office about 400 meters away in the same village; the National Federation of Sugarcane Workers (NFSW) office in Barangay Taculing; and on a house in Barangay 33, all in Bacolod, on Thursday night.

Separate operations in Escalante followed the next day, leading to the arrest of two women who were allegedly in possession of firearms.

The 15 minors, age 12 to 17, were being trained to be “rebel-warriors,” according to the military. They were turned over to the Department of Social Welfare and Development.

Authorities claimed that 32 assorted firearms, three fragmentation grenades, two grenade launchers and assorted ammunition were found on the premises of the Bacolod compound.

Capt. Cenon Pancito, public affairs officer of the Army’s 3rd Infantry Division, said the raids were carried out on the strength of a search warrant issued by Executive Judge Cecilyn Burgos-Villavert of the Quezon City Regional Trial Court Branch 89.

Pancito denied that the policemen and soldiers were specifically targeting leftist groups, saying they were acting on intelligence information regarding the illegal possession of firearms.

Seized from them were one .45-caliber pistol, one .38-caliber revolver and three 40mm grenade launchers.

In a statement, the military cited “validated information reports” based on suspicions among Bacolod residents of armed personalities visiting the searched premises.

“It was also reported that the said premises are being used for training and indoctrination of minors for illegal activities,” the military said.

In November 2018, President Duterte himself ordered the deployment of more soldiers and policemen to Negros Occidental, as well as in Negros Oriental, Samar and the Bicol region, to “suppress lawless violence and acts of terror.”

In Memorandum Order No. 32, which he issued last year, the President also authorized the intensified intelligence operations and investigation and prosecution of persons or groups involved in “acts of lawless violence.”

“There is a need to reinforce the directive of the President to prevent further loss of innocent lives and destruction of property, and bring the country back to a state of complete normalcy as quick as possible,” it said.

Communications Secretary Martin Andanar, in a statement, said the police-military operations were carried out in a “lawful, safe, quick and precise manner,” and would show “the government’s respect for democracy and its adherence to the rule of law.”

“We assert that any allegations that the raids conducted were a form of harassment are simply false and we have hard evidence secured to prove our argument,” he said.

Responding to the raids, human rights advocacy group Karapatan said it was “suspicious” that the search warrant used in Negros Occidental came from Quezon City.

“This is another case indicating a crackdown against activists. All elements, including the use of illegal possession of firearms and explosives to charge activists, are glaring in this latest [wave of] arrest[s] targeting critics of the government,” the group said in its statement.

KMP chair Danilo Ramos said in a statement, “The conduct of these mass raids were clearly illegal and unjust that the raiding teams had to come up with preposterous accusations that the civilians were allegedly conducting firearms and explosives training in the offices.”

“All freedom-loving citizens must unite, stand up against and resist this systematic harassment,” Bayan Muna said.

Makabayan, in its statement, said, “Past regimes attacked us before but we were not deterred and we will not be deterred. We call on the people to be vigilant and active in fighting Duterte’s tyranny and his looming dictatorship.” —WITH REPORTS FROM JULIE M. AURELIO, MARIEJO S. RAMOS, NIKKA G. VALENZUELA AND INQUIRER RESEARCH