Survivors’ cries: When will the earthquakes end? When will our misery stop? 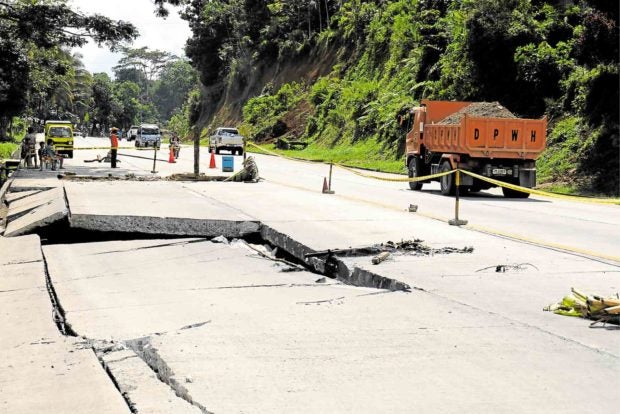 MAKILALA, COTABATO—“When will this end? When will our misery stop? We are poor. Why are we being punished with this calamity?”

This was the cry of Arthur, 53, who has been out of work in a rubber plantation since Oct. 16, when a 6.3-magnitude quake shook Makilala and other towns in central Mindanao.

“I work hard. I never beg for food, but now I will, as a last resort in order to survive,” said Arthur, who used to earn P100 a day to feed his family of five. He declined to give his full name for the Inquirer interview.

Arthur and other residents in the hinterland village of Santo Niño evacuated to the town center to escape landslides triggered by the quakes, which also created ground fissures that threatened their houses.

After Thursday’s 6.5-magnitude temblor, more families in Cotabato and Davao del Sur provinces, already reeling from two earlier quakes, have fled their communities to avoid harm or to find shelter because their homes had been destroyed.

On Friday, the Philippine Institute of Volcanology and Seismology reported a 5.0-magnitude quake southeast of Makilala at 2:07 p.m. It also said another strong quake struck offshore—a 5.5-magnitude 334 kilometers southeast of Sarangani province at midmorning.

The National Disaster Risk Reduction and Management Council (NDRRMC) reported that six people were killed by Thursday’s quake and 10 from the 6.6-magnitude temblor two days earlier.

In all, 21 people have been killed by the three major quakes centered near Tulunan, Cotabato. The NDRRMC said 403 people had been injured in the last two quakes.

Cotabato Provincial Board Member Jumar Cerebo, spokesperson for the crisis management committee, told the Inquirer that the board had enforced the total evacuation of nearly 2,000 families from high-risk villages in Makilala, especially Bato, Malungon, Malarian and Buhay, since Thursday night.

Cezario Joel Espejo, regional director of the Department of Social Welfare and Development, said close to 28,000 families had been displaced in central Mindanao, many from the towns of Makilala, M’lang and Tulunan, and from Kidapawan City.

“I am trembling as every now and then the ground is shaking. I can’t understand my feeling now. I am in a state of panic,” said Susan, 29, from Barangay Batasan.

“Children are crying, all of us are crying. We are traumatized by what happened and still happening,” she said.

She hoped that her family would be given psychological help, “otherwise, we might all go crazy.”

Estring, a 33-year-old mother of eight, was anxious about what the future holds for her family.

“Where are we going? What comes next? I don’t know what to do. Every now and then the ground shakes,” she said.

Concerned with urgent survival needs, Arthur, Susan and Estring were not keen on visiting the graves of loved ones on All Saints’ Day on Friday.

“What keeps me busy now is food and our safety,” Estring said.

The same somber mood prevailed in the quake-hit cities of Davao, Digos and Kidapawan where normally crowded cemeteries during the Day of the Dead were unusually peaceful and quiet this time as people preferred to stay at home or in makeshift shelters. 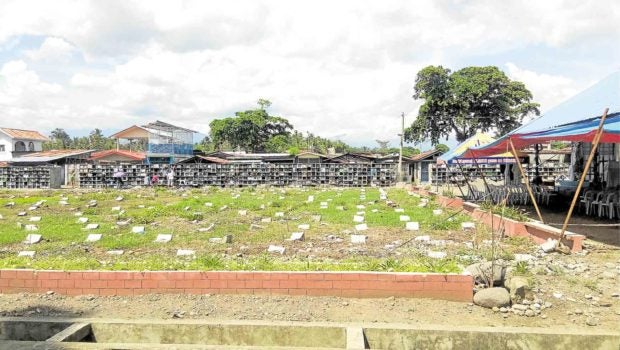 NEAR EMPTY, QUIET It was an unusually quiet scene at this cemetery in Digos City on All Saints’ Day when Filipino families normally flock by the tens of thousands to gravesites to pay their respects to departed loved ones. The recent deadly quakes and terrifying jolts from aftershocks in central Mindanao are discouraging people from leaving their homes or shelters. —ELDIE S. AGUIRRE

In Digos City, Mayor Josef Cagas banned overnight vigils in all cemeteries, allowing only visits up to 9:30 p.m. on Friday and Saturday.

Cagas, whose city was heavily devastated by the three quakes, said he did not want people to take chances with aftershocks.

Close to 500 families in the city have left their homes and moved to evacuation sites or pitched tents on vacant lots.

About 150 families lost their homes in Barangays Kapatagan and Balabag.

Commercial establishments have been closed pending full assessment of their structural integrity.

In Kidapawan, residents have been lining up for potable water since Thursday night after the spring sources of the water district were damaged. The Red Cross is helping provide water.

The fresh landslides triggered by Thursday’s temblor in communities at the foot of Mt. Apo have prompted local governments in Santa Cruz, Bansalan and Digos—gateways to the country’s highest peak—to temporarily close the mountain to climbers.

Energy Development Corp. said 100 workers at its two geothermal plants at the hinterland village of Ilomavis in Kidapawan were safe despite the landslides, said Romy Kee, plant facility head.

Kee said the company’s power plants at the foot of Mt. Apo “were initially affected and were put on turning gear operation only” as a result of the temblor.

Although the facilities required immediate structural assessment, Kee said they were prioritizing the safety of employees, their families and the community.

In Davao City, President Duterte lamented that he had to leave later on Friday for Bangkok, Thailand, to attend the Association of Southeast Asian Nations summit amid the disaster. (See story on Page A2)

“I do not want disasters to happen when I am not around. Not, not just for anything. Just to be here and do what you can do for your countrymen,” he said.

He earlier ordered local governments to inspect all buildings for structural soundness, noting that earthquakes were striking successively.

“They should start it now. The earthquake season has come. I don’t know if it will occur again between now and tomorrow,” Mr. Duterte said.

He said he was sleeping soundly in his Davao City home on Thursday when he was nudged awake at past 9 a.m.—not by the temblor but by two of his female security escorts from the Presidential Security Group.

“They are nurses and also serve as my security,” Mr. Duterte said. “Two of them woke me up. I said, ‘Why?’ ‘Sir, there’s an earthquake.’ I said, ‘It’s just an earthquake.’ They had to sit down when it got stronger.”

He said they wanted him to get out of his house for his safety.

“I said, ‘We’re all in the same boat here. There’s no cover. Just pray, it might do some good.’ They wanted me to get up, get out. I said, ‘It’s just an earthquake. It’s nothing.’”