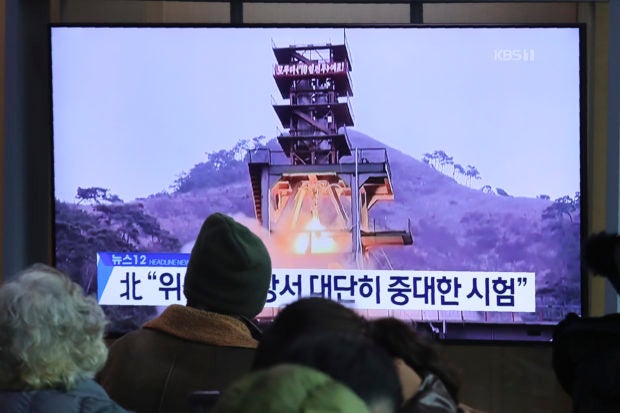 SEOUL, South Korea — A day after North Korea said it had performed a “very important test” at its long-range rocket launch site, there is wide speculation that it involved a new engine for either a space launch vehicle or a long-range missile.

Whatever it was, the North Korean announcement suggests that the country is preparing to do something to provoke the United States if Washington doesn’t back down and make concessions in deadlocked nuclear negotiations.

A look at the North Korean test, which comes as a year-end deadline set by North Korea for the U.S. to salvage the nuclear talks is approaching. 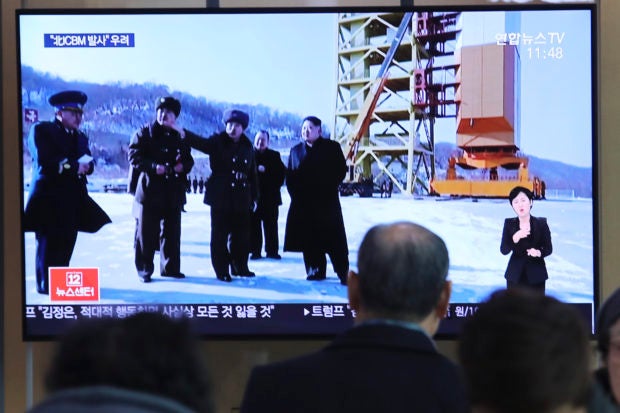 According to the North’s Academy of National Defense Science, the test was conducted on Saturday at its Sohae Satellite Launching Ground in the northwest, where North Korea has conducted banned satellite launches and missile engine tests in recent years.

When North Korean leader Kim Jong Un met U.S. President Donald Trump and South Korean President Moon Jae-in last year, he promised to dismantle this facility, better known as the Tongchang-ri site outside North Korea, as part of steps toward disarmament. The latest test lends credence to widespread skepticism about Kim’s seriousness in his commitment to denuclearization that he repeated during meetings with Trump and Moon.

While no rocket or weapons launch from North Korea was detected over the weekend, many foreign experts speculate that North Korea tested a new high-thrust engine, which is needed to launch bigger, more powerful rockets.

“Vehicles and objects appear on December 7 to conduct the test. They are mostly gone on December 8, but the ground appears to have been disturbed by the exhaust from the test,” he said.

Analyst Kim Dae-young at the Korea Research Institute for National Strategy in South Korea said the test is likely related to a space launch vehicle, not an ICBM. He said North Korea would not conduct a long-range missile launch or nuclear test unless it completely abandons talks with the U.S.

The fact that North Korea hasn’t revealed what kind of test it conducted also indicates the country is still interested in diplomacy with the United States. “If they don’t have talks with the U.S. in their mind, they would have disclosed photos (of the test) right away,” Kim said.

Shin Beomchul, an analyst from Seoul’s Asan Institute for Policy Studies, said the test is likely to be for a new solid fuel engine for an ICBM or a space launch vehicle. Either would allow North Korea to pressure the Trump administration for concessions without testing an ICBM or a nuclear device, which is where Washington apparently draws a red line, Shin said.

The use of solid fuel offers greater mobility for missiles and rockets and reduces the amount of launch preparation time. All space launch vehicles and ICBMs that North Korea has publicly tested used liquid propellants. They include the rockets used in two successful satellite launches in 2012 and 2016 and ICBMs used in three flight tests in 2017.

Whether it’s a satellite launch or an ICBM test flight, any such launch by North Korea is banned by the United Nations and would provoke the United States.

But an ICBM launch would have a bigger impact and derail diplomacy with Washington because it would be regarded as a resumption of North Korea’s push to acquire an ability to launch nuclear strikes on the American homeland. Washington and its allies viewed past North Korean satellite launches as covers for testing long-range missile technology and led punishing U.N. sanctions on the country, but they were still seen as less provocative than ICBM launches.

When North Korea conducted the three ICBM tests in 2017, Trump said he would bring “fire and fury” on North Korea and exchanged threats of total destruction with Kim, touching off fears of war on the Korean Peninsula. Kim has since suspended ICBM and nuclear tests, allowing Trump to brag about that as a foreign policy win.

“Kim Jong Un is too smart and has far too much to lose, everything actually, if he acts in a hostile way,” Trump tweeted Sunday. “North Korea, under the leadership of Kim Jong Un, has tremendous economic potential, but it must denuclearize as promised.”

After a second Kim-Trump summit in Vietnam in February collapsed due to disputes over the U.S.-led sanctions, North Korea warned it would seek a “new way” if the United States fails to abandon its hostility and make new proposals for the diplomacy by the end of this year. North Korea also recently warned that it is up to the U.S. to choose what “Christmas gift” it will get.

Kim, the analyst, said North Korea is likely to wait until early next year to perform a satellite launch and follow it with tests of a submarine-launched ballistic missile and of other new missiles.

He said a satellite launch would allow China and Russia to defend North Korea’s claim that it has a right to a peaceful space development program.

Lee Choon Geun, an expert at South Korea’s Science and Technology Policy Institute, said North Korea could try to launch its first surveillance satellite, which would allow it to peer into South Korea and beyond, potentially as far as Guam, where the U.S. has military bases.

Lee said North Korea might be building a space launch vehicle based on the liquid-fuel engines it uses for its Hwasong-15 ICBM, which was flight-tested in November 2017 and demonstrated a potential ability to reach deep inside the continental United States. North Korea test-launched another type of ICBM, Hwasong-14, twice earlier in 2017.

“It’s been a long time since they last launched a satellite and it’s not like they were standing still all this time,” Lee said. “They would have developed something by now.” IB/NVG