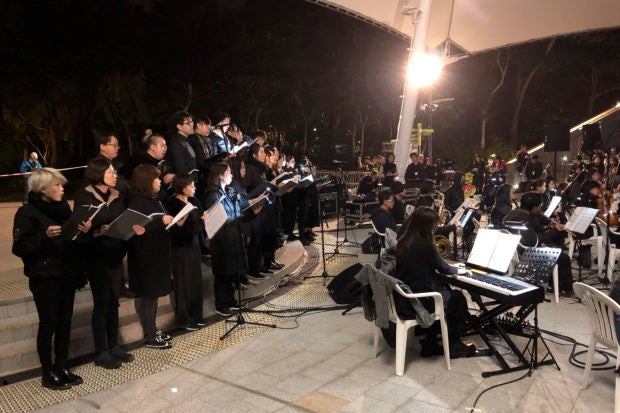 In this Tuesday, Dec. 10, 2019 photo, a theater troupe performs Les Miserables in at an outdoor event space in Hong Kong. A Hong Kong theater troupe is making audiences weep by touring a stirring production of ‘Les Miserables.’ Based on Victor Hugo’s tale of rebellion in 19th-century France, the rousing music and lyrics of struggle and resistance struck chords with audience members emotionally and physically drained after six months of protests that have convulsed the city. (AP Photo/John Leicester)

HONG KONG — For Hong Kong spectators mentally and physically drained from six months of pro-democracy protests that have convulsed the city, a rousing performance of “Les Miserables” proved almost too much to bear.

Audience members wept, dabbing their eyes with handkerchiefs, big tears rolling down their cheeks, as a Hong Kong theater troupe, aiming to both comfort and re-energize emotionally battered spectators, belted out the rousing musical based on Victor Hugo’s classic tale of rebellion in 19th century France.

Audience members said images from the protests flashed through their minds as they soaked up the free outdoor performance on Tuesday night.

The crowd several hundred strong joined with the troupe in singing “Do You Hear the People Sing?” – the stirring lyrics eloquently putting to words what many Hong Kong protesters feel.

“It is the music of a people who will not be slaves again!” they sang. “Will you join in our crusade? Who will be strong and stand with me?”

The amateur troupe, dressed in black, which has become the color of protest in Hong Kong, is made up of volunteers who responded to an online appeal for singers and musicians.

Singer Harriet Chung said their aim is to tour the show to all 18 of Hong Kong’s districts. Tuesday’s performance was the troupe’s third, staged in a park in Tai Po in the New Territories that are north of Hong Kong Island and Kowloon and which butt up against mainland China.

With no costumes and minimalist lighting, the show lacks the big-ticket stagecraft of Hollywood, Broadway, and London West End cousins but packs a powerful emotional punch in the febrile atmosphere of an anti-government protest in Hong Kong. 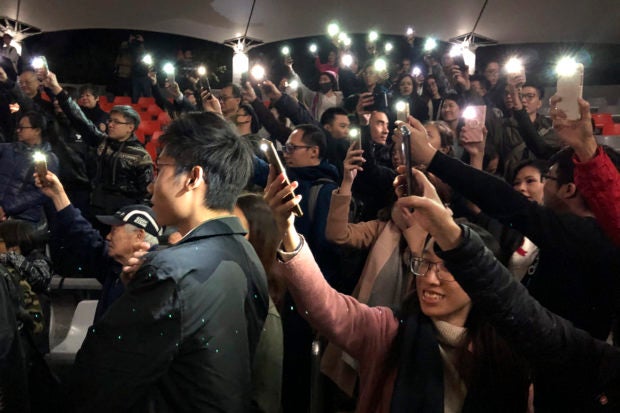 In this Tuesday, Dec. 10, 2019 photo, audience members hold their smartphones aloft after a performance of Les Miserables in at an outdoor event space in Hong Kong. A Hong Kong theater troupe is making audiences weep by touring a stirring production of ‘Les Miserables.’ Based on Victor Hugo’s tale of rebellion in 19th-century France, the rousing music and lyrics of struggle and resistance struck chords with audience members emotionally and physically drained after six months of protests that have convulsed the city. (AP Photo/John Leicester)

Wiping away tears that welled behind his glasses, red-eyed spectator Herman Tang said the song “Bring Him Home” made him think of protesters who were trapped by a police siege of a university campus last month.

“Very moved,” he said. “Some of the words in the song echo the current situation in Hong Kong.”

Organizers made booklets of the lyrics, in Chinese and English, for spectators to download onto their cellphones, so they could sing along. Audience members waved lit phones in the air during songs, creating a tapestry of lights. In the end, the troupe and the audience, accompanied by the orchestra, joined in a hair-raising rendition of “Glory to Hong Kong,” an anonymously penned anthem that has become the protest movement’s signature song.

Chung, the singer who works as a writer in her day job, said she’s long been a fan of “Les Miserables,” but that it strikes an especially deep chord now.

“It’s like pictures after pictures of happenings in Hong Kong passing through my mind when I sing the lyrics. Sometimes it’s heartbreaking. Sometimes it’s heartwarming,” she said. “There are pictures of protests, police violence, and the life we have lost, the brothers and sisters we lost in this movement, so it is a very emotional journey and I can feel that from the audience, too.”

Spectators who came to the show worried that the protest movement is flagging as it enters a seventh month went away feeling energized and sounding recommitted to a long-haul struggle. The movement is pushing five key demands, including full elections for Hong Kong’s legislature and leader and a probe of the city’s police force, which has fired 26,000 tear-gas and rubber-baton rounds at protesters and arrested more than 6,000 people.

“When people unite together, there is power,” said audience member Yan Chan. “We have the energy and power to make Hong Kong better.”