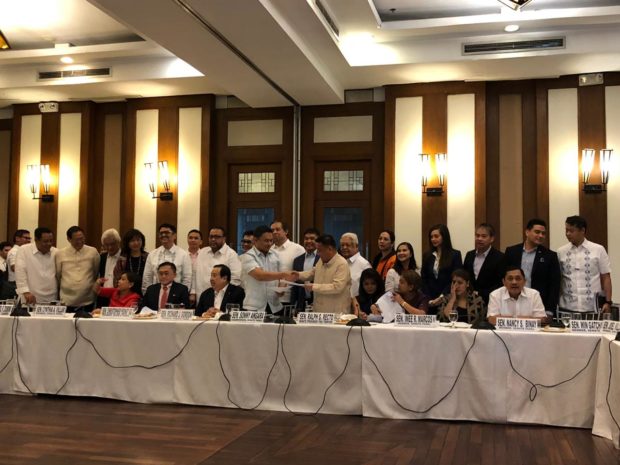 Members of the bicameral conference committee pose for a photo after they swiftly adopted and signed the committee report on the proposed national budget for 2020. Pathricia Roxas/INQUIRER.net

MANILA, Philippines — The proposed P4.1 trillion national budget for 2020 is now a step closer to becoming a law after the Senate-House panel signed and approved Wednesday morning the committee report on next year’s spending bill.

The Senate and House are also expected to ratify the budget bill later in the afternoon during their respective sessions in Pasay City and in Batasan, Quezon City.

Ungab said they plan to submit the 2020 General Appropriations Bill (GAB) to President Rodrigo Duterte by December 21. He has until December 31 to sign the GAB to prevent a reenacted budget come January 1, 2020.

The detailed amendments to the spending bill have yet to be released but next year’s budget is significantly higher compared with 2019’s P3.757 trillion. The discrepancies in the version of the Senate and the House were reportedly seen in the budgets of the Departments of Health, Transportation, and Public Works and Highways.

Congress’ passage of the 2019 GAB was delayed until February 8 this year due to bickering among legislators about alleged illegal pork barrel and insertions. Duterte signed the 2019 expenditure plan last April 15, but he vetoed some P93.5 billion that was “not within the programmed priorities” of his administration.