CANBERRA, Australia  – Australia’s prime minister said Tuesday that 11 Australians remained unaccounted for and 13 had been hospitalized after a volcano eruption in New Zealand. 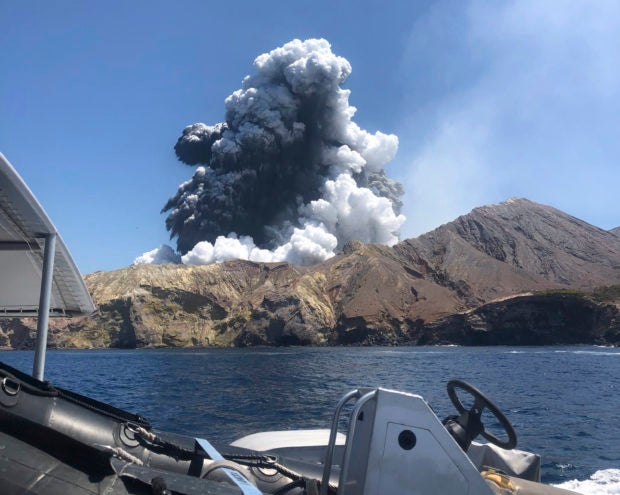 This Monday, Dec. 9, 2019, photo provided by Lillani Hopkins shows a volcanic eruption on White Island, New Zealand. Some relatives of those who were visiting the island at the time were forced to continue waiting for news of their loved ones, with authorities deciding it remained too dangerous for crews to land on the island and remove bodies. (Lillani Hopkins via AP)

Three Australians were suspected to be among the initial five confirmed dead, Prime Minister Scott Morrison told reporters in Sydney.

“I fear there is worse news to come over the course of perhaps today or over the next few days,” Morrison said.

“This is a terrible tragedy, a time of great innocence and joy interrupted by the horror of that eruption,” he added.

Australians were the largest group of nationalities that were exploring White Island when it erupted on Monday.

The 24 injured and unaccounted, whose ages range from 17 to 72, had been part of a tour group from the Royal Caribbean cruise ship Ovation of the Seas, which had left Sydney last week for a New Zealand voyage.

Morrison, a former director of the New Zealand Office of Tourism and Sport who has visited White Island in the past, said Australian police who specialize in identifying disaster victims was flying to New Zealand on Tuesday.

Several Australians were in critical condition at burn units in New Zealand hospitals, he said.

Frantic father Brian Dallow, of Adelaide, South Australia, said his lawyer son Gavin Dallow, 53, his partner Lisa Hosking, 48, and her daughter Zoe Hosking, 15, were among those whose fates were uncertain.

The family later said Lisa Hosking had been found in a Hamilton hospital.

“They were in the island, that’s now been confirmed, but whether they got off or what happened we don’t know,” Dallow earlier told Australian Broadcasting Corp.

“This is the worst. If we knew that something happened to them, it would better than this waiting, I can tell you at the moment. Because we just have to hold our horses and hope for the best,” he added.

Former student Jesse Langford, his 17-year-old sister Winona Langford and their parents Anthony and Kristine Langford were among those visiting the island from the cruise ship.

“Please have the Langford family in your prayers,” principal Duncan Troy wrote in a statement.

A desperate Australian family is also seeking details about Julie Richards, 47, and her 20-year-old daughter Jessica Richards who were booked for a White Island excursion on Monday.

The mother’s sister, Barbara Whitehead told the ABC that relatives were “overwhelmed” by a lack of information from authorities.

Ovation of the Seas passenger Donna Field, said at more than $300 per person, the 7-hour White Island tour was among the most expensive day-trip options. Field, an Australian journalist based in Brisbane, Queensland state, said there had been no warning of heightened seismic activity. Field said she had opted for a mountain climb.

Field said the captain has told passengers that they would not continue the cruise until late Tuesday at the earliest and that “they were trying to make the families of those affected — people on board the ship who had not gone on the tour, but their family members had — they are trying to make them as comfortable as possible in this terrible time.”

“The best way to describe it is surreal because life on the cruise ship is one big holiday and that continued for a large part — you know, you had the wave pool going and the kids on the climbing wall, people sipping their cocktails, but then lots of people on their phones trying to understand what was going on and people watching the televisions, talking to their loved ones who were checking on them because obviously with 5,000 people on board, there are a lot of uncertain people all around the world trying to find out what happened to their friends and family, and check on them,” Field said.

“I think today though, it’s all really sad. Everyone’s in a bit of shock today, trying to understand how someone’s magical holiday can come to such a tragic end,” she added.