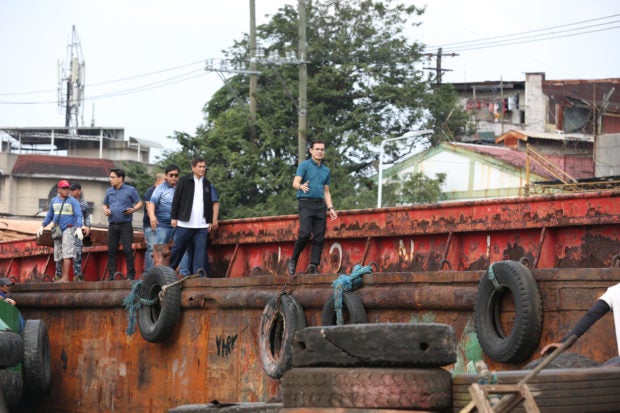 MANILA, Philippines — A day after the relaunching of the Pasig River Ferry Service, Manila Mayor Francisco “Isko Moreno”Domagoso on Tuesday led an inspection of moored barges as the Philippine Coast Guard (PCG) issued a memorandum circular prohibiting the double berthing of vessels on the waterway.

Based on Memorandum Order No. 2019-1011 issued by Cimatu, all public offices and officials concerned were ordered to clear the vital waterway of “all obstructions and blockages… immediately.”

In line with this, PCG Memorandum Order No. 05-07, which allowed double berthing on the Pasig River effective in 2007, was rescinded.

This meant that vessels would be allowed only to park on one side of the river to widen the space for traffic, prevent accidents and allow the smooth travel of ferry boat passengers.

Before the inspection, Domagoso held a meeting at City Hall to discuss the rehabilitation of the 25-kilometer river. He said that in October, he asked the Philippine Ports Authority (PPA) to ensure that the waterway would be kept clear.

On top of seven vessels found moored on the river, the PCG reported that there were also 14 illegal structures.

“If these are considered illegal structures, then they are obstructions [in the Pasig River] from the very beginning … and we need to immediately remove them from the waterway,” Domagoso said.

According to Tugade, the vessel owners would be given three days to leave the river.

“Whether they like it or not, I think they should go back to the appropriated space for them by the Philippine Ports Authority (PPA)… They are doing business there at the expense of the general public’s safety and the environment, for that matter,”Domagoso said.

The PPA said that it had instructed its officials to comply with the PCG order and that it would provide a barge holding area for the displaced vessels.Lim added that the MMDA had deployed harvesters to clear the river of water hyacinths that could damage ferry boats.