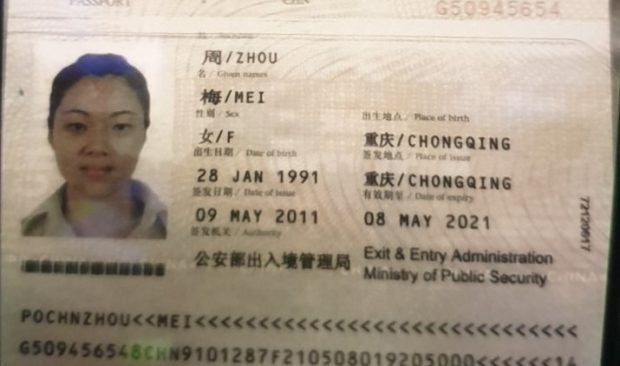 HAVE YOU SEEN HER? As of 7 p.m. Tuesday, alleged kidnap victim Zhou Mei has yet to be found. –PHOTO COURTESY OF MAKATI

MANILA, Philippines — At least four persons of interest — all Chinese — were being sought by the police in connection with the alleged kidnapping of a Chinese woman right in the heart of Makati City’s central business district on Monday night.

The police told reporters on Tuesday that, based on their investigation, the 28-year-old victim was acquainted with some of the suspects.

The initial evidence also pointed to a possible personal transaction between the parties involved.

The victim was identified by Col. Rogelio Simon, Makati police chief, as Zhou Mei, a native of Chongqing, who was working in the country for a Philippine offshore gaming operator (Pogo) company based in Makati.

According to Simon, Zhou and her alleged kidnappers “know each other (magkakakilala)” based on a review of security footage and witnesses’ accounts.

“There was no commotion while the victim was walking with two of the suspects. She was not dragged; she went with them without struggling,” Simon said, noting that Zhou “casually boarded” the gray van parked in front of an office building at the corner of Paseo de Roxas and Nieva Street in Legazpi Village past 9 p.m.

According to police, Zhou was living in a nearby condominium unit.

A few moments later, she was about to get out of the vehicle when she “started struggling and screamed for help”— a moment captured by a witness in a video that immediately went viral.

The police were still investigating the motive for the incident but said that without a demand for ransom, it remained a suspected kidnapping.

Simon said that footage taken by several closed-circuit television camera showed the vehicle — a grey Kia Carnival with plate number LSA 880 — going around the area after Zhou was taken, before driving away.

“Maybe they were transacting with the victim inside the van,” he noted. “If their purpose was to get money, she should have been driven to a far away place immediately [and] her relatives [contacted] for ransom.”

A verification with the Land Transportation Office showed that the van’s plate number had been issued to a white Mitsubishi L300 van owned by a Feng Cao, another Chinese national.

The police were still trying to locate him. They were also hoping that some documents dropped by the victim at the scene could lead them to the suspects.

According to Maj. Gideon Ines, chief of the Makati police investigation unit, they recovered an unsigned deed of sale between Zhou’s husband, Chen Tangbin, also Chinese and a Pogo employee, and another Chinese national.

Based on the undated document, Chen was selling a car to the buyer for P1 million.

Upon police verification, however, the address given by the buyer as well as his driver’s license turned out to be both fake.

Read Next
Belmonte, San Roque residents vow to find ‘win-win situation’
EDITORS' PICK
US policy shift on SCS maritime row raised during call between Pompeo, Locsin
PH with highest COVID-19 cases in SE Asia? DOH cites different ‘settings’
Alibaba’s Taobao Maker Festival 2020 reels off with first ever Roadshow and Hybrid Online-offline Virtual Experience
Smart 5G goes live
Water remains our saving grace right now
Filipinos killed in Beirut blasts now at 4, wounded at 31 – DFA
MOST READ
Captain astonished that his ship delivered Beirut explosive
Lawmaker’s wife accuses him of concubinage, gets threats from his son
The biggest lottery jackpot in the world is $158 million, and even someone from the Philippines could win it
Palace on Cardema return in NYC: No one can question President’s prerogative
Don't miss out on the latest news and information.