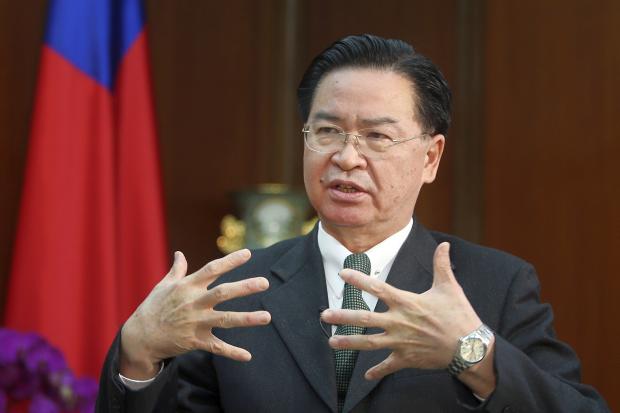 Taiwanese Foreign Minister Joseph Wu gestures while speaking during an exclusive interview with The Associated Press at his ministry in Taipei, Taiwan, Tuesday, Dec. 10, 2019. Wu was careful to say his government has no desire to intervene in Hong Kong’s internal affairs and that existing legislation is sufficient to deal with a relatively small number of Hong Kong students or others who seek to reside in Taiwan. (Photo by CHIANG YING-YING / AP)

TAIPEI, Taiwan — Taiwan’s top diplomat said Tuesday that his government stands with Hong Kong citizens pushing for “freedom and democracy,” and would help those displaced from the semi-autonomous Chinese city if Beijing intervenes with greater force to quell the protests.

Speaking to The Associated Press in the capital, Taipei, Foreign Minister Joseph Wu was careful to say his government has no desire to intervene in Hong Kong’s internal affairs, and that existing legislation is sufficient to deal with a relatively small number of Hong Kong students or others seeking to reside in Taiwan.

But he added that Hong Kong police have already responded with “disproportionate force” to the protests. He said that any intervention by mainland Chinese forces would be “a new level of violence” that would prompt Taiwan to take a different stance in helping those seeking to leave Hong Kong.

“When that happens, Taiwan is going to work with the international community to provide necessary assistance to those who are displaced by the violence there,” he said.

Chinese paramilitary forces have deployed to the Chinese city of Shenzhen, just outside Hong Kong, since the protests began in June. Neither they nor the thousands of Chinese military troops garrisoned in Hong Kong itself have been deployed to confront the protesters so far.

“The people here understand that how the Chinese government treats Hong Kong is going to be the future way of them treating Taiwan. And what turned out in Hong Kong is not very appealing to the Taiwanese people,” Wu said.

China’s Communist Party insists that Taiwan is part of China and must be reunited with it, even if by force. Modern Taiwan was founded when Chiang Kai-shek’s Nationalists, who once ruled on the mainland, were forced to retreat to the island in 1949 after the Communists took power in the Chinese Civil War.

Beijing has suggested that Taiwan could be reunited under the “one country, two systems” model that applied to Hong Kong after the former British colony was returned to China in 1997. That agreement allowed Hong Kong to keep its civil liberties, independent courts and capitalist system, though many in Hong Kong accuse Beijing of undermining those freedoms under President Xi Jinping.

Taiwanese President Tsai Ing-wen has said that the “one country, two systems” model has failed in Hong Kong and brought the city to “the brink of disorder.”

Government surveys earlier this year showed that about 80% of Taiwanese citizens oppose reunification with China.

Wu spoke a month before Taiwanese voters go to the polls for presidential and parliamentary elections on Jan. 11. Opinion surveys suggest that Tsai, a U.S. and British-educated law scholar who rejects Beijing’s claims to Taiwan, is on track to secure a second term over her more China-friendly rival, Han Kuo-yu of the Nationalist Party.

China severed links with Taiwan’s government after Tsai took office in 2016 because of her refusal to accept Beijing’s claims on the island. It has since been increasing diplomatic, economic and military pressure on Taiwan.

That includes sending aircraft carriers through the Taiwan Strait — the most recent transit was last month — and peeling away Taiwan’s few remaining diplomatic allies. Two more, the Solomon Islands and Kiribati, switched their diplomatic recognition to Beijing in September.

A second term for Tsai would see a continuation of Taiwan’s tough stance against its much larger neighbor.

“If President Tsai is reelected, we’ll continue to … maintain the status quo across the Taiwan Strait. We’ll continue to send out goodwill gestures to China,” Wu said. “We want to make sure that the Chinese have no excuse in launching a war against Taiwan.”

Taiwan, known officially as the Republic of China, lacks a seat at the United Nations. It counts on its 15 official diplomatic allies, which are mostly small and poor, to help bolster its claims to international legitimacy.

Safeguarding diplomatic relations with those remaining countries is a top priority for the Ministry of Foreign Affairs, Wu said.

“I think our relations with these 15 countries are quite strong at this moment and we don’t worry that much,” he said.

Taiwan also has unofficial relationships with several other countries, including the United States, which does not support its independence but is bound by law to ensure its defense.

The Trump administration has increased support for Taiwan even as it is embroiled in a trade war with China. The U.S. this year agreed to sell 66 F-16 fighter jets worth $8 billion to Taiwan, prompting complaints by China.

Wu said Taiwan’s relationship with the U.S. is the best it has been in 40 years — a reference to the four decades since Washington formally shifted its diplomatic relations with China from the government in Taipei to the one in Beijing.

The ongoing trade war between the U.S. and China is creating both opportunities and challenges for Taiwan, Wu acknowledged. Taiwanese companies are big investors in China, and some are moving their businesses off the mainland as the trade war drags on, he said, citing $23 billion of investments pledged by companies relocating operations back to Taiwan.

But he said Taiwan enjoys “strong bipartisan support” in Washington and is not concerned that its status with the U.S. could be used as a bargaining chip in the trade negotiations.

“We are being assured … by very senior Trump administration officials that their relations with Taiwan is independent of relations with any other country and to the United States, Taiwan is a very important partner,” he said.