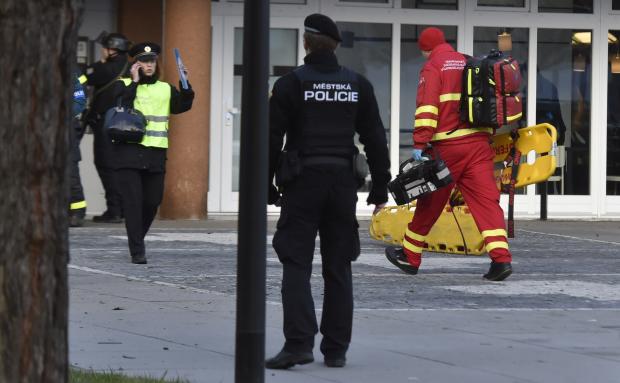 Police personnel and paramedics outside the Ostrava Teaching Hospital after a shooting incident in Ostava, Czech Republic, Tuesday, Dec. 10, 2019. Police and officials say at least four people have been killed in a shooting in a hospital in the eastern Czech Republic. Two others are seriously injured. (Photo by Jaroslav Ozana / CTK via AP)

PRAGUE — Six people were killed and three more wounded in a shooting in a hospital in the eastern Czech Republic Tuesday, the prime minister and officials said. The apparent suspect later shot himself dead as police approached his car.

He said he was heading for the site, at the University hospital in the eastern city of Ostrava, 350 kilometers (220 miles) east of Prague.

“I’d like to assure the public that there’s no danger anymore,” Hamacek said.

Police identified the suspect as a 42-year-old man. Several hundred police officers had launched an extensive manhunt, using two helicopters, for the suspect and his silver-gray Renault Laguna car.

Police published a photo of the suspect, having withdrawn an earlier photo of a different man. They said that man was now considered to be a witness.

Clinic director Jiri Havrlant told media the dead were four men and two women. Another man and a woman had to be operated on, while one person was more lightly wounded.

ADVERTISEMENT
Read Next
Rohingya: A moment of truth in The Hague
LATEST STORIES
Jaja Santiago powers Japanese squad to semis stint
Neda seeks Congress OK of key economic bills before solons get busy for 2022 polls
Hotdog bassist Dennis Garcia remembered by daughter after his death: ‘Glad I have your songs’
House to hold crucial session in Batangas on Jan. 22
‘A greener, cleaner tomorrow’: A how-to guide for Filipinos who want to help with today’s energy crisis
MOST READ
Palace: Crisis over ABS-CBN franchise unlikely
Motorcycle taxis ‘illegal’ starting next week — LTFRB board member
Senators think TWG’s move to axe motorcycle taxi pilot run an act of ‘revenge’
Marcos monument beside Aquino’s stirs Tarlac town
Don't miss out on the latest news and information.