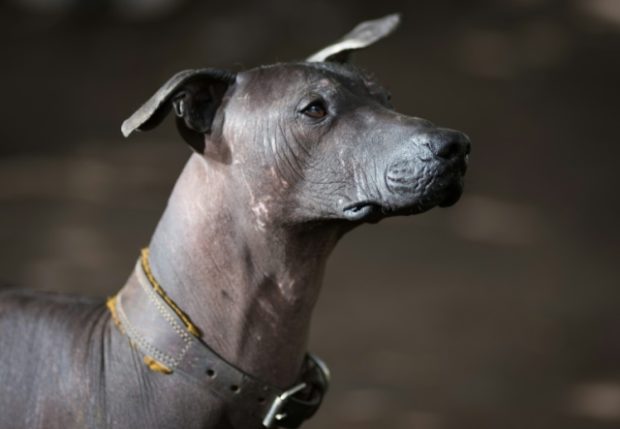 At a stately museum in Mexico City, priceless paintings by Frida Kahlo and Diego Rivera share pride of place with an unruly pack of hairless black dogs: Mexico’s prized Xoloitzcuintle.

The 13 dogs who reside on the leafy grounds of the Museo Dolores Olmedo are the direct descendants of ones that belonged to Kahlo and Rivera, whose searingly intimate portraits (her) and sprawling murals (him) made them the towering power couple of 20th-century Mexican art.

Kahlo and Rivera were proud of their Mexican heritage, which made the Xoloitzcuintle — a tongue-twister pronounced something like show-low-eats-QUEEN-t-lay — an obvious choice for the family dog.

They even put their dogs in their paintings — some of them now on display at the museum where their great-great-grandpuppies reside.

“Xolos,” as they are known for short, are a quintessentially Mexican dog.

The ancient species goes back 7,000 years and was first domesticated around 5,500 years ago.

The Aztecs named the dog for the god of death, Xolotl, combined with “itzcuintli,” or dog. They had themselves buried with xolos so the dogs could guide them to Mictlan, the underworld where they believed life continued after death.

The dogs have gone in and out of style since the Spanish conquistadors arrived in 1519 and toppled the Aztecs.

But five centuries later, they are rolling around in the glory of a renaissance, beloved by the hipster set in trendy neighborhoods across Mexico City and the country.

“The Xoloitzcuintle has not just served as an inspiration and model to Mexican artists, it has also joined the list of icons that represent Mexican identity, such as Day of the Dead skeletons, Frida Kahlo and the Aztec calendar,” said Maria Olvido Moreno, an art historian at Mexico’s largest university, UNAM.

Xolos lack hair — though some do have a mohawk on top of their head — because of a genetic mutation that makes their organisms unable to read the DNA for fur, according to experts. 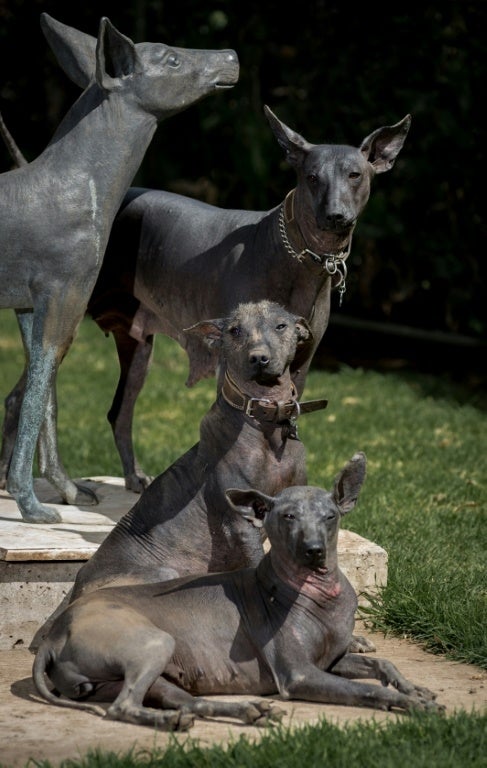 Xoloitzcuintles were able to survive largely thanks to the mountains in southern Mexico, where they lived in the wild before being re-domesticated by indigenous farmers. Image: Omar TORRES – AFP

They are also known for missing pre-molar teeth, which leads to another characteristic look: their pink tongues can often be seen lolling out of their mouths.

Additionally, their bodies are particularly warm. In ancient times, people with rheumatism or asthma would press the dogs to their bodies as treatment.

By the time Mexico launched its war for independence from Spain in 1810, the Xolo was on the brink of extinction.

The Spaniards had spurned the dogs as a symbol of what they considered pagan beliefs, and even killed and ate them.

But Xolos were able to survive largely thanks to the mountains of southern Mexico, a remote region where they lived in the wild before being re-domesticated by indigenous peasant farmers.

But the dogs’ big cultural comeback came after the Mexican Revolution of 1910.

The revolution ousted dictator Porfirio Diaz and his Europhile ruling class. The new Mexican cultural elite, including Kahlo and Rivera, set about reclaiming long-stigmatized symbols of indigenous identity — not least the Xolo.

Rivera gave a pair of them to their friend Dolores Olmedo, a businesswoman, philanthropist and art collector.

Those are the ancestors of the dogs that now roam the grounds of the museum Olmedo established in her former home, which hosts the world’s largest collection of Kahlo and Rivera paintings.

There is a statue in the dogs’ honor on the museum grounds, and a professional caretaker just for them.

“To us, these dogs are living works of art, just like Rivera’s and Kahlo’s paintings,” said curator Josefina Garcia.

Xolos have become cool once again in the 21st century — the dog of choice for 20- and 30-somethings proud to embrace their Mexican heritage.

They have had articles devoted to them in such places as the style pages of The New York Times, were declared an official “icon of Mexico City” in 2016 and are the preferred pooch for residents like Ruben Albarran, frontman for famed rock band Cafe Tacvba.

“They have this link to Mexican culture that I love,” Albarran told AFP.

“Xolos are a good choice for people who are interested in Mexican identity. And a hairless dog makes an excellent pet for fast-moving Mexico City. They can live in an apartment and are easy to care for,” said Raul Valadez, an expert at UNAM’s paleozoology lab.

Proud Xolo owner Oscar Gamas, a 43-year-old audio designer in Mexico City, said he, like many people, first got interested in the dogs for their “symbolism.”

But then he fell in love with his dog Deck’s reserved yet fiercely loyal and protective personality.

“When you live with one, you discover they have a personality that really sets them apart,” he said. NVG

LOOK: This couple’s pet dogs joined the entourage in their Cavite garden wedding