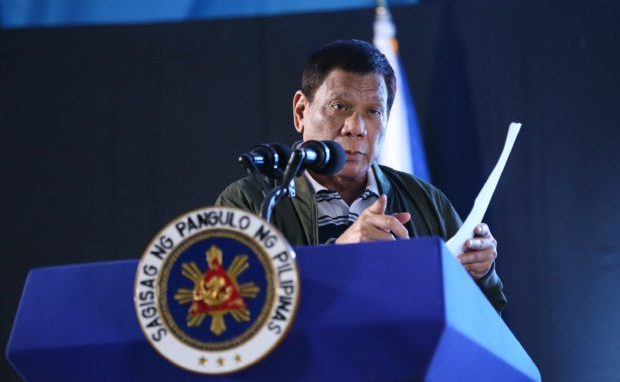 MANILA, Philippines — President Rodrigo Duterte on Tuesday threatened to take over privately-owned Maynilad Water Services, Inc. and Manila Water Company, Inc. for what he called the “onerous” 1997  water concession agreements they entered into with the government.

Duterte said he would want to talk to officials of the water concessionaires as well as the government lawyers involved in the drafting of the contracts.

“I will expropriate everything. I will seize everything. File charges until you want. Anyway, I will be out in two years,” Duterte said in a speech during the oathtaking of newly-appointed government officials in Malacañang.

In separate decisions, the Singapore-based Permanent Court of Arbitration ordered the Philippine government in 2017 to pay P3.6 billion to Maynilad and in November to compensate P7 billion to Manila Water for losses suffered by the water firms due to disallowed water rate increases from 2013 to 2017.

The 25-year water concession agreements were signed in 1997 during the Ramos administration and extended in 2009 through the Arroyo administration until 2037 – long before their expiration in 2022.

Duterte has ordered the filing of economic sabotage charges against those involved in the government’s water concession agreements with Maynilad and Manila Water.

“I will feel the pulse of the people,” he said.

“If they say, ‘Mayor, go after them,’ then I’ll file an economic sabotage case. My case is airtight. If you evaluate the [expletive] contract with the anti-graft law, it is a mirror of the Anti-Graft and Corrupt Practices Law,” he added, speaking partly in Filipino.

The President said he would want to talk to the officials of water concessionaires and the lawyers who drafted the agreements.

“I really don’t know yet how to hit them because I want to see everybody, including their lawyers. If they don’t want to come here, I will drag them,” he said.

“If you will force my hand, I will throw my last card,” he went on. “If you refuse, okay… Then I will suspend the writ of habeas corpus. And I will drag you here for widespread economic sabotage… I want them all to face me here. I will face them one by one — the [expletive] lawyers who made the contract. And who were the MWSS officials involved?  And I will ask them: What the fuck did you do and screwed the country?”