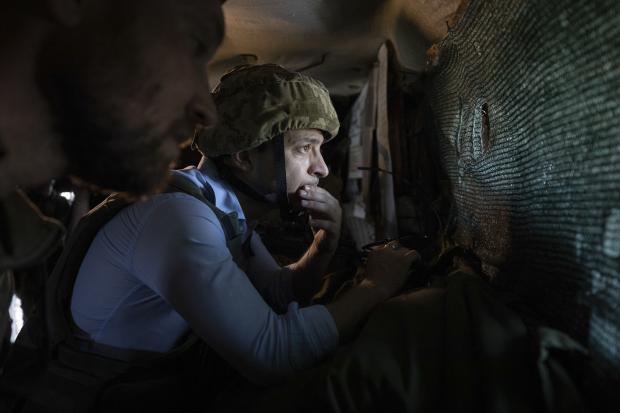 In this undated file photo provided by the Ukrainian Presidential Press Office, Ukrainian President Volodymyr Zelenskiy looks at the front line position from a shelter as he visits the war-hit Luhansk region, eastern Ukraine. Ukraine’s president sits down Monday, Dec. 9, 2019, for peace talks in Paris with Russian President Vladimir Putin in their first face-to-face meeting, and the stakes could not be higher. More than five years of fighting in eastern Ukraine between government troops and Moscow-backed separatists has killed more than 14,000 people, and a cease-fire has remained elusive. (Photo from the Ukrainian Presidential Press Office via AP)

More than five years of fighting in eastern Ukraine between government troops and Moscow-backed separatists has killed more than 14,000 people, and a cease-fire has remained elusive. While Zelenskiy has made ending the conflict a priority, the political novice arrives at the table with the veteran Kremlin leader in what appears to be a less-advantageous position:

— Zelenskiy still hasn’t had the White House meeting with U.S. President Donald Trump that he sought to bolster his stature on the world stage.

— French President Emmanuel Macron, the host of the meeting, has made clear recently that he wants to re-engage with Russia and get back to doing business again after five years of sanctions imposed on Russia over its actions in Ukraine.

— Macron and the other mediator in the talks, German Chancellor Angela Merkel, will be meeting Zelenskiy for the first time since it emerged that he criticized them in the July 25 phone call that has become the focus of an impeachment investigation against Trump.

So there are concerns among those who support Ukraine’s sovereignty that Zelenskiy might end up giving too many concessions to Putin. That could lead to a backlash from Ukrainians who strongly oppose any rapprochement with Russia.

The talks are being organized in the so-called Normandy Format, which was launched soon after Russia’s annexation of Ukraine’s Crimean Peninsula in 2014 and its backing of the separatists in eastern Ukraine. The consultations had stalled since 2016 but have been revived following Zelenskiy’s election.

“There is a whole cocktail of economics and geopolitics that make the situation for Ukraine very difficult and is posing lot of challenges,” said Bruno Lete, a security expert at the German Marshal Fund of the U.S., a leading think tank.

The biggest challenge for Kyiv probably comes from France itself, with Macron speaking recently of the “brain death” of NATO because of a lack of coordination and leadership from Washington and also saying he wants to re-engage with Russia.

“It’s like telling Russia, ’I will work with you and we’ll see about Ukraine,’” Lete said. “He should have waited until after the Normandy meeting. It doesn’t help the cause of European security.”

The Normandy Format talks had also been revived following several confidence-building steps between Moscow and Kyiv, including prisoner swaps and troop withdrawals by both sides.

On Sunday, Pope Francis said he was praying for the talks to bring peace “to that territory and its population.”

Taras Kuzio, a security expert and professor at the National University of Kyiv Mohyla Academy, said Zelenskiy has already weakened his own position by agreeing to the talks even though Russia insists Crimea is non-negotiable.

Kuzio described the 41-year-old Zelenskiy, until recently a comedic actor, as “extremely naïve about international relations” and said he will find himself in a difficult place — facing a tough opponent in Putin and a population that would reject any capitulation to Moscow.

He said Zelenskiy doesn’t grasp that the Russian leader will never compromise over the conflict in eastern Ukraine because “for Putin, compromise is a defeat.”

And Macron’s pursuit of a reset with Moscow doesn’t help Ukraine either.

“The danger is that Zelenskiy will be ambushed by Macron working in effect for Putin because his new agenda is to repair relations with Russia, to get back to a normal relationship, get back to doing business,” Kuzio said.

Despite the challenges, Ukraine still has the support from the European Union, its biggest foreign donor, while Merkel has strongly supported sanctions on Russia.

But Germany’s longer-term economic interests are a continual challenge for Ukraine.

Berlin is seen as having harmed Ukraine’s interests by moving forward with the completion of a Russian-German gas pipeline called Nord Stream 2 that will bring Russian natural gas to Western Europe. Its route bypasses Ukraine, cutting off its leverage as a transit country and an income source.

Germany’s relationship with Moscow has been complicated by last week’s expulsion of two Russian diplomats over the brazen killing of a Georgian national in Berlin in August, with prosecutors suggesting the slaying was either ordered by Russia or authorities in the republic of Chechnya.

Zelenskiy also isn’t helped by the revelations in the July 25 phone call with Trump. A rough transcript of the call revealed him accusing Merkel and Macron of giving too little help to Ukraine. At one point, Zelenskiy tells Trump: “When I was speaking to Angela Merkel, she talks Ukraine, but she doesn’t do anything.”

At the time of the call, the White House was withholding nearly $400 million in military aid to Kyiv, adding to Ukraine’s fears that the U.S. was turning its back on the vulnerable nation.

Ukrainian suspicions that the West cares more about doing business with Russia than Ukraine’s sovereignty go back to when the former Soviet republic declared its independence in 1991.

A diplomatic cable written in 2009 by then-U.S. Ambassador to Ukraine William Taylor described frustration by Kyiv’s political elite. The Ukrainians believed Berlin was an “obstacle in their drive towards EU and NATO membership,” Taylor wrote in the cable, which has been published by Wikileaks.

Taylor, now the acting U.S. ambassador to Ukraine who testified in the impeachment hearings in Congress, cited a colorful formulation by Ukraine’s former National Security and Defense Council Chairman Volodymyr Horbulin which underscored that.

Taylor wrote that Horbulin joked that there are two Russian embassies in Kyiv, but “one speaks German.”

Vadim Karasev, head of the Institute of Global Strategies, an independent Kyiv-based think tank, said the Europeans “have grown tired of Kyiv’s endless problems and are increasingly looking at Moscow, which has all the instruments to leverage the situation.”

“They increasingly remind Kyiv about delayed reforms and corruption instead of talking about solidarity and a common European home,” Karasev said.

European powers, he said, “can’t endlessly deal with Kyiv’s problems when they have their own issues to solve.”