Caricature as cure: ENT doc has nose for news satire 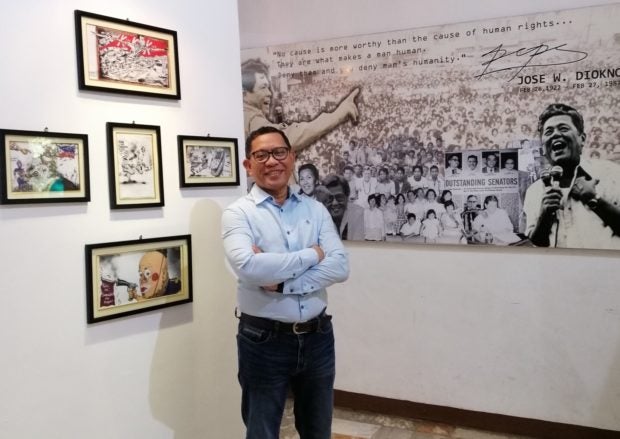 ON-CALL FOR SOCIETY’S ILLS Ongoing at the Commission on Human Rights is an exhibit of the editorial cartoons by Dr. William ‘‘Dok Net’’ Billones, whose works have also been published in the Inquirer. —CONTRIBUTED PHOTO

MANILA, Philippines — Between attending medical conferences and checking on his patients, one doctor has realized that society’s ills need as much attention.

Meet William “Dok Net” Billones, who specializes in otorhinolaryngology — the surgical and medical management of conditions in the head and neck — as well as ear, nose and throat (ENT) diseases.

Long before he became enthralled with medical practice, Billones discovered and nurtured his talent for drawing and illustrations.

On Friday, he launched a solo exhibition of some of his works at the Commission on Human Rights, as part of this year’s celebration of International Human Rights Day on Dec. 10.

The doctor as artist

Billones, a zoology major at the University of the East (UE) during the tail end of the martial law era in the early 1980s, found “release” and “a way to make sense of the suffering endured by the entire country” by contributing editorial cartoons to the campus paper.

In his undergraduate years at UE, Billones started contributing to national dailies, including the opposition newspaper, Ang Pahayagang Malaya.

It became a regular gig after former Sen. Ninoy Aquino was shot dead at the airport in 1983 on his return from self-exile in the United States.

Billones continued to contribute to the paper even when he went on to medicine proper. He slowed down a bit during his residency years, but went on to contribute to other publications, including the Philippine Daily Inquirer, People’s Journal, the Manila Times and Abante.

Being a doctor has not stopped him from expressing clinical but graphical view of the country’s politics. Using strong language, his witty caricatures make short work of political personalities and their foibles.

The stronger he feels about an issue, the faster he finishes his artwork, Billones said.

“When it’s something I’m really passionate about, I can finish a cartoon in an hour or less,” he added.

While still as prolific as in his student days, Billones admitted that some things have changed.

For one, he has transitioned from traditional pen and ink pieces to digital artwork created on an iPad. His main outlet has changed as well. Recognizing the changing audience landscape, he now posts most of his works on Facebook where more millennials can access them.

“Young people are more visual now. And that’s one strength that cartoons have,” Billones said. “They are able to transmit an idea or an opinion almost instantly.”

The power of his medium, he added, lies not in getting people to agree with him, but getting them to start a conversation even on difficult topics.

“There is never any wasted effort because even if people don’t agree with you, at least you helped strike a conversation,” he said.

While some might see editorial cartoons as something deceptively simple and even old-fashioned, it is this very simplicity that makes his medium all the more important especially at a time when the country is “very divided,” he said.

Billones hopes that through his cartoons, Filipinos can start conversations on problems affecting the country. In recent months, he has drawn cartoons about the Dengvaxia scare, extrajudicial killings, paid trolls on social media, irresponsible mining, and poverty, among others.

At the same time, he recognizes the limitations of the medium in that it forces an artist to focus on easy to grasp details that do not require long explanations.

“It also depends on whether viewers will open their minds to it. Until now, there are some people who refuse to criticize those in power,” he said.

For those similarly inclined, Billones has straightforward advice: always keep the passion for your art burning.

“Passion is very important because if you’re passionate, you put your heart and mind in your drawing, and the reader can feel that — be it anger, sadness or joy,” he said.

But he cautions young artists to set aside any notion or aspiration of becoming popular.

“You don’t have to be popular; just stick to what you believe in,” he said.