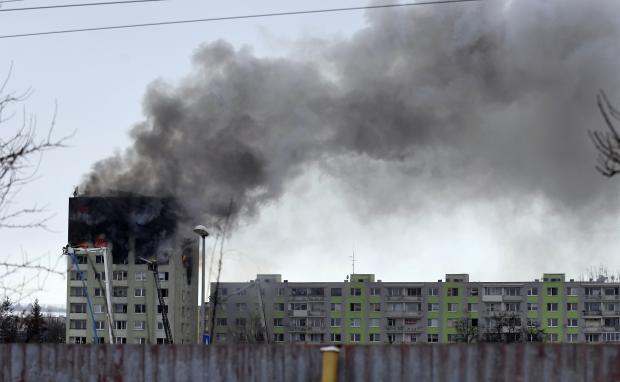 Smoke rise from a damaged 12-storey apartment block after a gas explosion in Presov, Slovakia, Friday, Dec. 6, 2019. Officials say a gas explosion in an apartment block in Slovakia has killed at least five people and others are trapped on the roof of the building. Firefighters say the explosion occurred in a 12-story building in the city of Presov shortly after noon on Friday. (Photo by Frantisek Ivan / TASR via AP)

BRATISLAVA, Slovakia — Officials on Saturday raised the death toll from a gas explosion in an apartment building in eastern Slovakia to seven.

Firefighters and the town hall of the city of Presov said one person is still missing.

The explosion occurred toward the top of the 12-story building on Friday. The entire top half of the building burned and the top three floors were destroyed, firefighters said.

Rescuers have said some 40 people were injured.

More than 100 firefighters tackled the blaze, which was finally fully extinguished on Saturday morning.

Prime Minister Peter Pellegrini, who visited the site late Friday, said the building is so damaged that it’s possible it will have to be demolished.
People in surrounding homes also had to be evacuated.