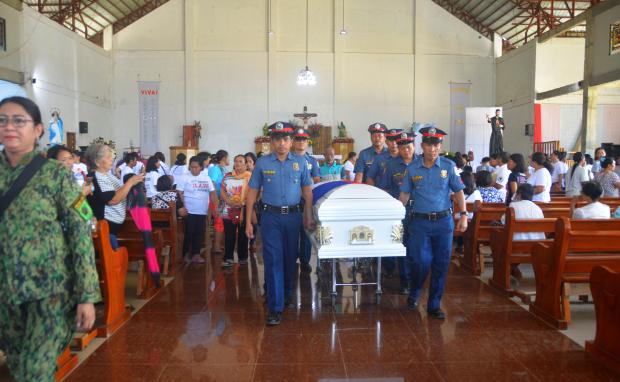 Magno was buried nine days after he was killed in a grenade blast inside Initao Community College in Barangay Jampason on Nov. 28.

In his homily, Fr. Lyndon Zayas, St. Francis Xavier parish priest, cited Magno’s “very powerful act of sacrificing his life for the safety of others.”

Zayas said Magno’s body inside the casket was a strong message for everybody that “there is no greater love that man can give than to give up his life for others.”

“That is what we see in the life of Jason. That was not only a single act of heroism but that was a product of many situations of heroism in his life. What he did was not the first time,” Zayas noted.

“When there is a person arrested and he learned that the family of the suspect is poor, he will provide the needs of the family,” Ranario recalled.

“If there is a person arrested for a very light crime and could afford to post bail, he would offer to lend some amount,” she added.

Ranario further said that a month before Magno died he shouldered the bill of a neighbor who was hospitalized because of dengue.

“He is a very dedicated government worker… I cannot remember him complain about whatever assignment is given to him. He participated in all our events. But he still managed to give time to his family.”

Zayas hopes that the public will reflect on Magno’s life and be inspired to live a meaningful life “not only for our selves but also for others.”

“Until we can practice living for others, we cannot experience genuine happiness, and we won’t have satisfaction in life. Jason showed us that our life is meant to others, just like Jesus Christ, who died on the cross, not for himself but for us,” Zayas said.

Last Nov. 28, Magno and his colleague, Senior Master Sgt. Alice Balido, responded to a distress call at the Initao Community College because there was a man, later identified as Ibrahim Bashir, who was brandishing a grenade.

Magno scuffled with Bashir for control of the grenade, which fell to the ground already without its pin. He attempted to grab and throw it away from the people. Instead, he threw himself over the grenade.

The blast wounded Balido and 16 students, but police said there could have been more people hurt if not for Magno’s heroic deed.

Balido, though wounded, was able to shoot dead the suspect.

On Thursday, Magno’s family received from President Rodrigo Duterte a posthumous Medal of Valor at the officer’s wake at his mother’s house in Purok 11, Barangay Poblacion.

The benefits of this award include a lifetime survivorship pension to the wife with an additional P75,000 every month.

According to Lt. Gen. Archie Gamboa, acting chief of the Philippine National Police, in case Magno’s children would like to enter the PNP Academy, they would not be required to take the entrance exam.

Magno was also conferred the Order of Lapu-Lapu, Rank of Kalasag.

At wake of hero cop, Duterte tells police he wants them brave but preferably alive