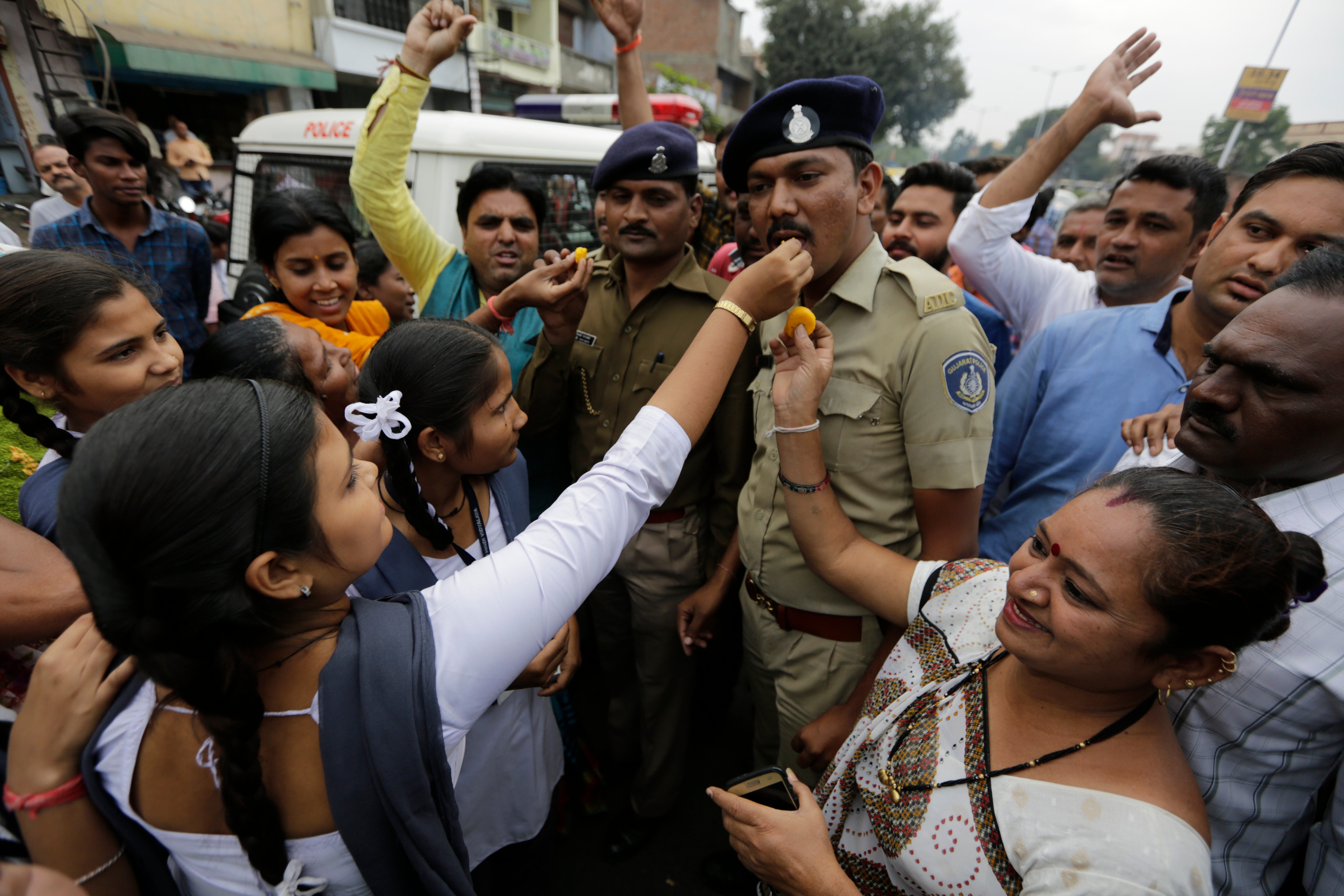 SHADNAGAR, India — A top Indian rights group launched an investigation Saturday into a police shooting of four rape-murder suspects, after accusations they were gunned down to assuage public anger.

News of the investigation came as the country reeled after the death on Friday of a woman who had been set on fire on her way to a sexual assault hearing.

Police said that they shot the four suspects, who had been in custody for a week, early Friday after they snatched officers’ guns during a re-enactment at the crime scene organized by detectives.

Their deaths prompted celebrations, with hundreds heading to the scene and showering officers with flower petals, as politicians, celebrities and sports stars congratulated police on social media.

On Saturday morning, police were still at the scene outside Hyderabad in southern India as motorists stopped their cars on the busy highway to look and take photos with their phones.

Others have expressed horror, however, with one Supreme Court lawyer calling it “murder in cold blood” and Amnesty International saying the “alleged extrajudicial execution” should be investigated.

The operation was overseen by a police officer involved in two similar incidents including when three acid attack suspects were killed in a forest in 2008, the Indian Express daily reported Saturday.

Late on Friday the High Court in the southern state of Telangana where the incident happened ordered that the bodies be preserved until Monday evening and that their autopsies be filmed.

A team from the National Human Rights Commission was expected at the scene later Saturday.

The Commission said that it was concerned that the killings would “send a wrong message to society.”

“If the arrested persons were actually guilty, they were to be punished as per law pursuant to the directions of the competent court,” a statement said.

The four men had, according to police, confessed during interrogation to gang-raping and murdering on November 27 the 27-year-old vet before setting fire to her body under a bridge.

The case prompted nationwide protests and calls for swift — and tough — justice from a slow and overburdened legal system that campaigners say all too often fails to convict rapists.

After the men were arrested last Friday, hundreds of people laid siege to the police station where they were being held. One lawmaker called in parliament for the suspects to be “lynched”.

After they were killed on Friday, the pregnant 17-year-old wife of one of them told Indian media: “Take me to the same place and kill me too.”

The father of another called the deaths a “cold-blooded killing… Why did they punish them even before completing the legal process?”

But the murdered woman’s father said: “justice was done”.

Separately on Friday, a woman who had been set on fire on Thursday by men she had accused of raping her succumbed to her injuries in the northern state of Uttar Pradesh.

The victim, who suffered 90-percent burns, had told police that she was attacked by two men who had raped her and three others on her way to a court hearing.

“Despite our best efforts, she did not survive,” said Shalab Kumar, head of burn and plastic surgery at the Safdarjung Hospital in New Delhi, according to the PTI newswire.

All five suspects have been arrested and are being questioned, senior policeman Suvendra Kumar Bhagat told AFP.

The victim’s brother told local media that said she would get justice when all those who killed her go to the place “where she has gone.”