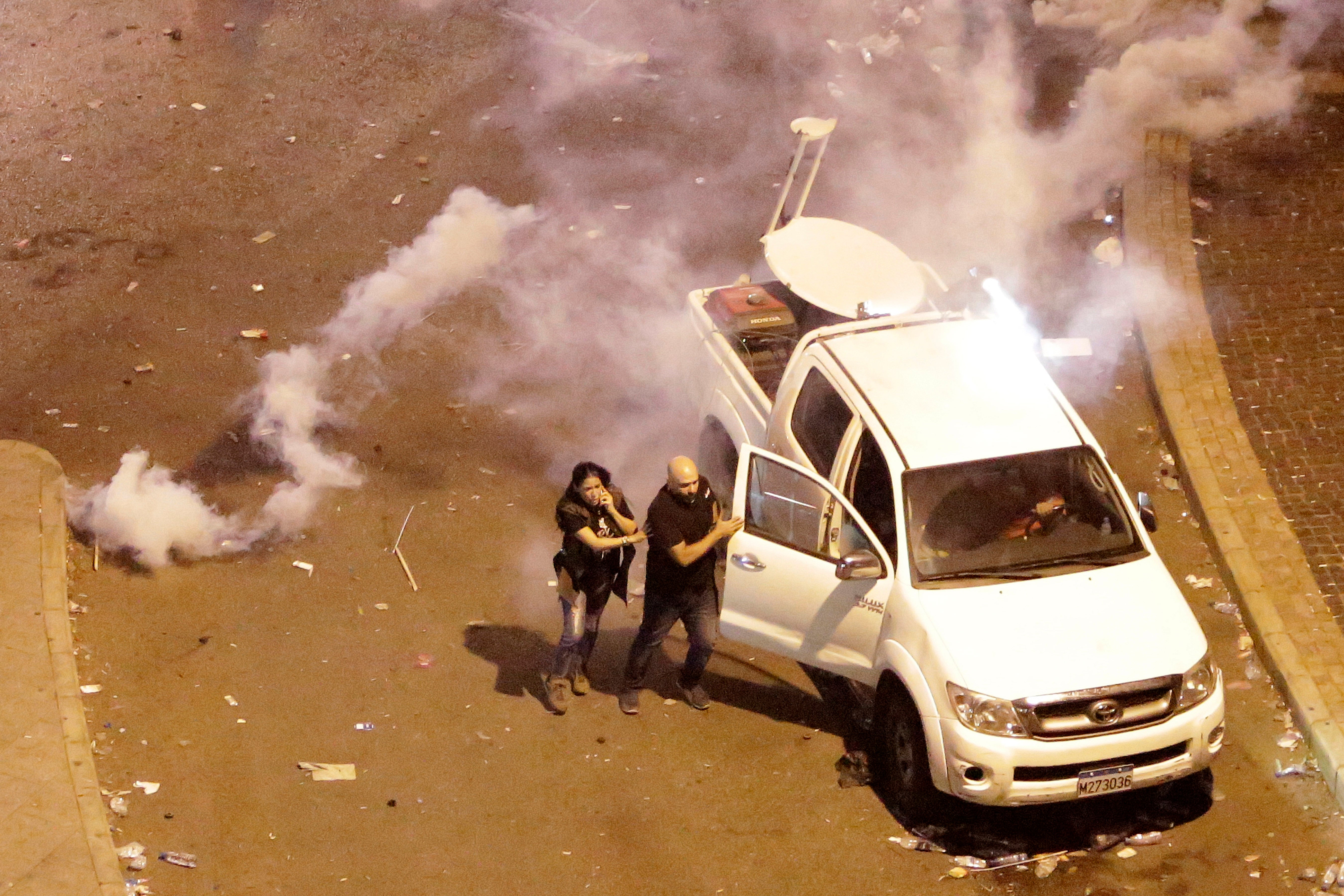 In this Friday Oct. 18, 2019 photo, Lebanese reporter Joyce Akiki, left, runs from tear gas during an anti-government protest, in Beirut, Lebanon. Lebanese journalists are facing wide-ranging harassment and obstacles to their work – including verbal insults and physical attacks, even death threats – amid reporting on nearly 50 days of anti-government protests, drawing into question Lebanon’s reputation as a haven for free speech in a troubled region. (AP Photo/Hassan Ammar)

BEIRUT — Lebanese journalists are facing threats and wide-ranging harassment in their work — including verbal insults and physical attacks, even death threats — while reporting on nearly 50 days of anti-government protests, despite Lebanon’s reputation as a haven for free speech in a troubled region.

Nationwide demonstrations erupted on Oct. 17 over a plunging economy. They quickly grew into calls for sweeping aside Lebanon’s entire ruling elite. Local media outlets — some of which represent the sectarian interests protesters are looking to overthrow — are now largely seen as pro- or anti-protests, with some journalists feeling pressured to leave their workplaces over disagreements about media coverage.

The deteriorating situation for journalists in Lebanon comes despite its decades-old reputation for being an island of free press in the Arab world. Amid Lebanon’s divided politics, media staff have usually had wide range to freely express their opinions, unlike in other countries in the region where the state stifles the media.

The acts of harassment began early in the protests. MTV television reporter Nawal Berry was attacked in central Beirut in the first days of the demonstrations by supporters of the militant group Hezbollah and its allies. They smashed the camera, robbed the microphone she was holding, spat on her and kicked her in the leg.

“How is it possible that a journalist today goes to report and gets subjected to beating and humiliation? Where are we? Lebanon is the country of freedoms and democracy,” Berry told The Associated Press.

Outlets like MTV are widely seen as backing protesters’ demands that Lebanon’s sectarian political system be completely overturned to end decades of corruption and mismanagement.

Rival TV stations and newspapers portray the unrest — which led to the Cabinet’s resignation over a month ago — as playing into the hands of alleged plots to undermine Hezbollah and its allies. Many of those outlets are run by Hezbollah, President Michel Aoun’s Free Patriotic

Movement and the Amal Movement of Parliament Speaker Nabih Berri. These media regularly blast protesters for closing roads and using other civil disobedience tactics, describing them as “bandits.”

For Berry, the media environment worsened as the unrest continued. On the night of Nov. 24, while she was covering clashes between protesters and Hezbollah and Amal supporters on a central road in Beirut, supporters of the Shiite groups chased her into a building. She hid there until police came and escorted her out.

“I was doing my job and will continue to do so. I have passed through worse periods and was able to overcome them,” said Berry, who added she is taking a short break from working because of what she passed through recently.

Hezbollah supporters also targeted Dima Sadek, who resigned last month as an anchorwoman at LBC TV. She blamed Hezbollah supporters for robbing her smartphone while she was filming protests, and said the harassment was followed by insulting and threatening phone calls to her mother, who suffered a stroke as a result of the stress.

“I have taken a decision (to be part of the protests) and I am following it. I have been waiting for this moment all my life and I have always been against the political, sectarian and corrupt system in Lebanon,” said Sadek, a harsh critic of Hezbollah, adding that she has been subjected to cyberbullying for the past four years.

“I know very well that this will have repercussions on my personal and professional life. I will go to the end no matter what the price is,” Sadek said shortly after taking part in a demonstration in central Beirut.

Protesters have also targeted journalists reporting with what are seen as pro-government outlets. OTV station workers briefly removed their logos from equipment while covering on the demonstrations to avoid verbal and physical abuse. The station is run by supporters of Aoun’s FPM.

“The protest movement has turned our lives upside down,” said OTV journalist Rima Hamdan, who during one of her reports slapped a man on his hand after he pointed his middle finger at her. She said the station’s logo “is our identity even though sometimes we had to remove it for our own safety.”

Television reporters with Hezbollah’s Al-Manar and Amal’s NBN channels were also attacked in a town near Beirut, when they were covering the closure of the highway linking the capital city with southern Lebanon by protesters. In a video, an NBN correspondent is seen being attacked, while troops and policemen stand nearby without intervening.

“The biggest problem regarding these violations is that there is no punishment,” Mhanna said. Authorities usually fail to act even when they identify those behind attacks on journalists, he added.

Coverage of the protests also led to several journalists resigning from one of Lebanon’s most prominent newspapers, Al-Akhbar, which is seen as close to Hezbollah, and the pan-Arab TV station Al-Mayadeen, which aligns closely with the policies of Iran, Syria and Venezuela.

Joy Slim, who quit as culture writer at Al-Akhbar after more than five years, said she did so after being “disappointed” with the daily’s coverage of the demonstrations. She released a video widely circulated on social media that ridiculed those who accuse the protesters of being American agents.

Sami Kleib, a prominent Lebanese journalist with a wide following around the Middle East, resigned from Al-Mayadeen last month. He said the reason behind his move was that he was “closer to the people than the authorities.”

“The Lebanese media is similar to politics in Lebanon where there is division between two axes: One that supports the idea of conspiracy theory, and another that fully backs the protest movement with its advantages and disadvantages,” Kleib said.