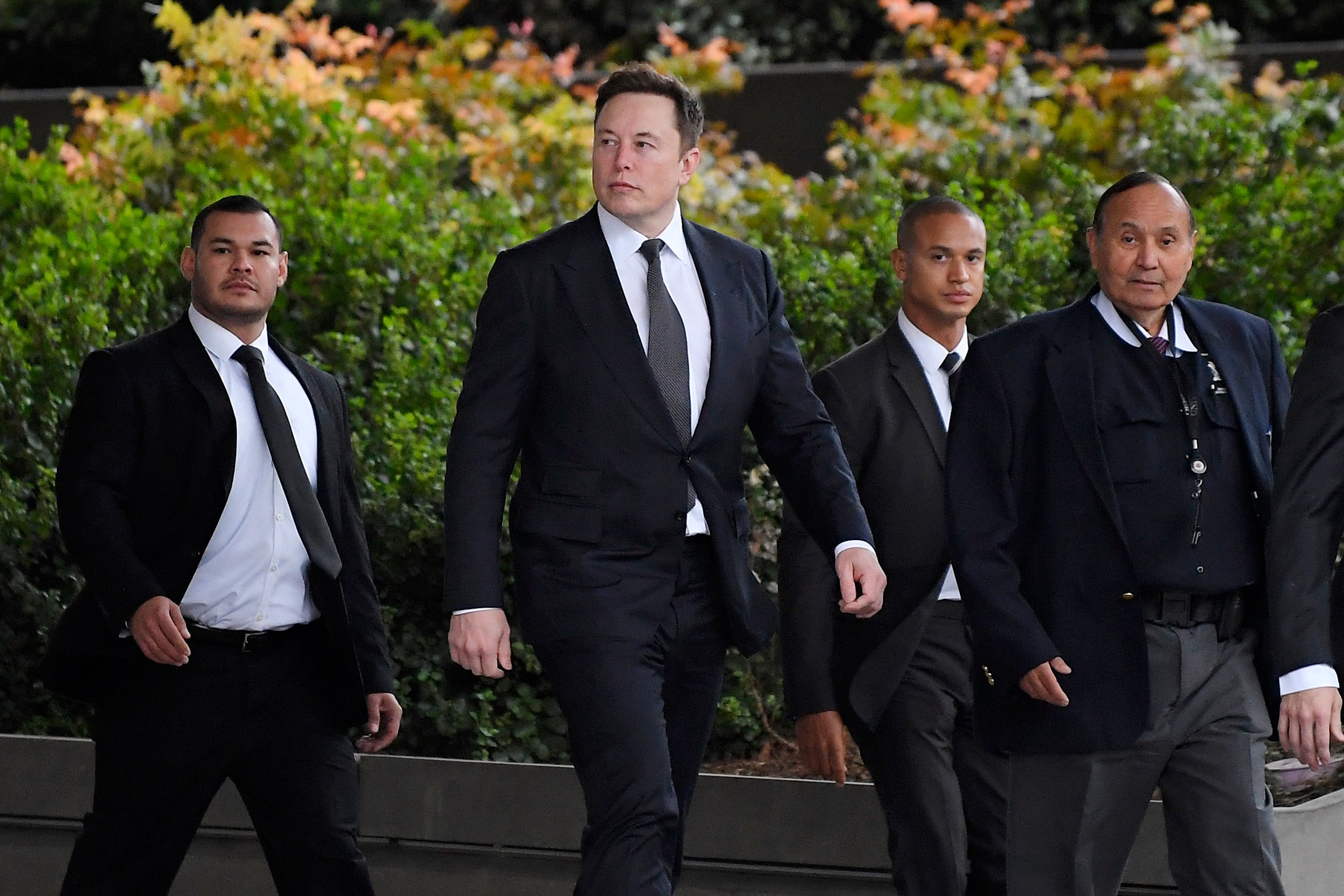 Tesla CEO Elon Musk, second from left, arrives at U.S. District Court Wednesday, Dec. 4, 2019, in Los Angeles. Musk is going on trial for his troublesome tweets in a case pitting the billionaire against a British diver he allegedly dubbed a pedophile. (AP Photo/Mark J. Terrill)

LOS ANGELES  — Elon Musk defeated defamation allegations Friday from a British cave explorer who claimed he was branded a pedophile when the Tesla CEO called him “pedo guy” in an angry tweet.

Vernon Unsworth, who participated in the rescue of 12 boys and their soccer coach trapped for weeks in a Thailand cave last year, had sought $190 million in damages for the shame and humiliation caused by the man his lawyer called a “billionaire bully.”

It took less than an hour for an eight-person jury in Los Angeles federal court to reject Unsworth’s claim after a four-day trial.

Musk said the verdict restored his faith in humanity as he quickly left the court with his security detail.

Musk — who deleted the tweet and later apologized for it — had asserted the expression was nothing more than a flippant insult that meant “creepy old man,” not pedophile.

Unsworth had provoked the attack by belittling Musk’s contribution to the rescue — a miniature sub his engineers built that was never used — as ineffective and nothing more than a “PR stunt.”

He further earned the ire of the tech whiz by suggesting Musk stick the sub “where it hurts.”

On Friday, it was Unsworth who felt the pain.

“I accept the jury verdict, take it on the chin, and move on,” Unsworth said outside court.

He said they spent too much time trying to appeal to jurors’ emotions and not concentrating on the evidence.

“The failure probably happened because they didn’t focus on the tweets,” Jones said after the verdict was announced. “I think they tried to get our emotions involved in it.”

Attorney Lin Wood, in an impassioned and at times emotional closing argument, suggested the jury should award $190 million. Wood said $150 million of that figure should be a “hard slap on the wrist” to punish Musk for what he said was akin to dropping an atomic weapon on his client that would create problems for years like radioactive fallout.

He suggested the figure would be reasonable given that Musk testified his stock in Tesla and SpaceX is worth about $20 billion. But Musk’s lawyer, Alex Spiro, ridiculed the suggested verdict as “numbers being thrown out like ‘The Price is Right.'”

Wood said it was important to challenge Musk’s tweet in court even if they didn’t win. Unsworth had said the statement would appear true if he didn’t sue.

“Anybody that knows this man knows beyond a shadow of a doubt that Elon’s accusations were false,” Wood said outside court. “This was not the justice that he deserved under the evidence.”

While Musk was cleared of liability, the trial was just the latest incident where he’s faced legal problems because of troublesome tweets.

Musk and Tesla reached a $40 million settlement with the Securities and Exchange Commission last year over allegations he misled investors with a tweet declaring he had secured financing to buy out the electric car maker. Earlier this year, the SEC sought to hold him in contempt of court for tweeting a misleading projection of how many cars Tesla would manufacture. That led to a new agreement imposing tight controls on Musk’s tweets about the company.

The day after Musk’s tweet about Unsworth, Tesla stock price fell 3% and shareholders and people within the company were urging him to apologize. Musk said he resisted at first because he didn’t want to look “foolish and craven” by doing so right after the stock dropped.

Musk’s lawyer told the jury the tweet did not rise to the level of defamation and cases over insults didn’t belong in federal courtrooms.

Spiro said Unsworth had tried to profit off his role in the cave rescue and basked in the many accolades he received.

Unsworth had been honored by the queen of England and the king of Thailand, had his photo taken next to British Prime Minister Theresa May and been asked to speak at schools and contribute to a children’s book, which showed that no one took Musk’s insult seriously.

“People accused of pedophilia don’t get celebrated by world leaders,” Spiro said. “Kings and queens and prime ministers don’t stand next to pedophiles.”

Unsworth hadn’t demonstrated actual damage to his reputation other than asserting over a couple minutes of emotional testimony delivered with his voice cracking that he felt isolated, ashamed and dirtied, Spiro said. There was no supporting testimony from his girlfriend or other friends who could discuss the impact they witnessed, no evidence he had lost business or relationships as a result of the tweet and he hadn’t sought psychological counseling or medication.

He urged jurors to return a verdict that would make clear no reasonable person would conclude Musk had called him a pedophile.

“Tell Mr. Unsworth once and for all, ‘You are not a pedophile,’ ” Spiro said. “With our verdict, we free you, we free you from parole.”