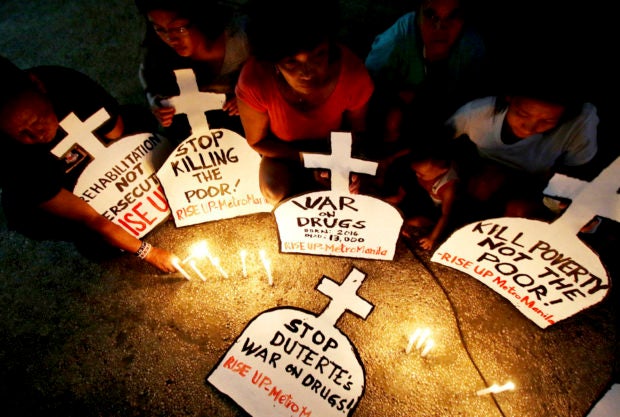 BONDING IN GRIEF Families from urban poor communities who lost loved ones in what they believe to be extrajudicial killings carried out in pursuit of President Duterte’s war on drugs gather for prayers at the Church-run Caritas Manila in Pandacan, Manila, in this Oct. 28, 2017 file photo. —RICHARD A. REYES

MANILA, Philippines — The chief prosecutor of the International Criminal Court (ICC) said she intended to wrap up next year the preliminary examination of the allegations of crimes against humanity that President Rodrigo Duterte committed in his war on drugs, a move welcomed by the complainants who it saw as a “glimmer of hope” that he would be held liable for the thousands killed.

In a 77-page report on Thursday that included the Philippine case, ICC Prosecutor Fatou Bensouda said she had looked into the complaints that Mr. Duterte and other senior government officials “actively promoted and encouraged the killing of suspected or purported drug users and/or dealers.”

She said it was “in such context” that law enforcers and “unidentified assailants” had carried out thousands of killings throughout the country.

“During 2020, the Office (of the Prosecutor) will aim to finalize the preliminary examination in order to enable the prosecutor to reach a decision on whether to seek authorization to open an investigation into the situation in the Philippines,” Bensouda said.

Malacañang did not immediately respond to the Inquirer’s request for comment.

In a statement in February 2018, Bensouda emphasized that a preliminary examination was a process of examining available information to determine whether she should proceed with an investigation in accordance with the Rome Statute, the treaty that created the ICC.

A livid Mr. Duterte verbally attacked Bensouda and the ICC for acting on the complaint of crimes against humanity filed by lawyer Jude Josue Sabio in April 2017.

In August last year, a similar complaint was filed in the ICC by the National Union of Peoples’ Lawyers (NUPL) on behalf of the relatives of eight alleged victims of extrajudicial killings attributed to the President’s war on drugs.

“People are already inquiring and keenly awaiting an update on the case,” he added.

The Philippine National Police has reported that more than 6,600 have been killed since the antinarcotics campaign began on Mr. Duterte’s first day in office, but various local and international human rights groups say the death toll is in the tens of thousands.

For former Sen. Antonio Trillanes IV, one of the President’s arch critics, Bensouda’s report signaled that “justice is coming.”

He urged PNP officers who carried out the drug killings to now decide “whether you would fall with Duterte on being liable for crimes against humanity or you would partly cleanse your crime by being a witness for the ICC prosecutors.”

“Now, let me point out the obvious,” he said. “As Duterte steps down from office in just a little over two years, he would not be able to protect you.”

“In fact, even Duterte won’t be able to protect himself,” Trillanes said.

Bensouda said the ICC “retains jurisdiction over alleged crimes that have occurred on the territory of the Philippines during the period when it was
a state party to the (Rome) Statute”— from Nov. 1, 2011, to March 16, 2019, which was the day before the Duterte government withdrew from the treaty.

She noted that the exercise of the court’s jurisdiction was “not subject to any time limit,” or even if the country were “no longer a state party to the ICC.”

“It validates our view and repudiates the Duterte administration’s weak and erroneous position on the effectivity, jurisdiction and independence of the ICC on this matter as a parallel or alternative legal remedy when victims are running out of options to turn to,” Olalia said.

“Most importantly, it validates the fact that all these years, what we have endured are self-serving and self-righteous justifications for extrajudicial killings and other acts amounting to crimes against humanity,” he said.

The ICC prosecutor said her office used “open source information,” including news reports and official statements by the Philippine government,
in examining the actions of the President and other public officials.

“Open source information indicates that a limited number of investigations and prosecutions have been initiated (and, in some cases, completed) at the national level in respect of direct perpetrators of certain criminal conduct that allegedly took place in the context of, or connection to, the (drug war) campaign,” she said.

In assessing the complains, Bensouda said her office reached out to “relevant stakeholders” and met with members of civil society organizations.

“The office has also been following with concern reports of threats and other measures apparently taken against human rights defenders, including those who have criticized the [drug war],” she said.