MANILA, Philippines – Police Senior Master Sergeant Jason Magno, who died after shielding students from a grenade explosion at the Initao College in Misamis Oriental, was posthumously conferred the Order of Lapu-Lapu Magalong Medal and the Philippine National Police (PNP) Medal of Valor by President Rodrigo Duterte.

Duterte visited Magno’s wake on Thursday night and bestowed the awards to the late police officer through his family. 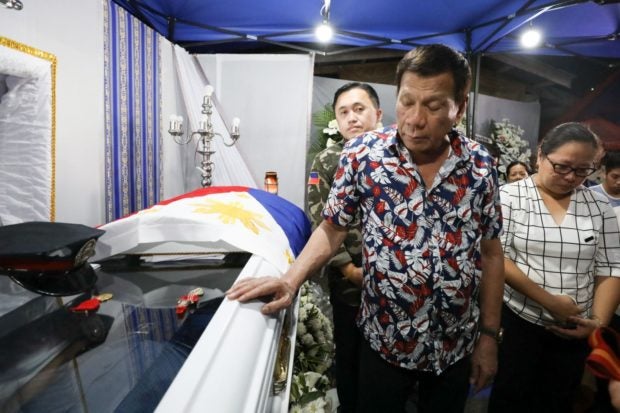 Magno, trained explosives and ordnance disposal specialist, was among the first responders at the scene when a man wielding a bladed weapon and grenade entered the Initao College campus in Barangay Jampason, Misamis Oriental last week.

Magno and the suspect wrestled for the grenade, but the latter had already pulled its safety pin and threw it to the ground.

Magno immediately “embraced” the grenade with his body, killing him instantly but preventing more fatalities.

The President also visited Police Senior Master Sergeant Alice Balido who was among those wounded in the blast.

She was awarded an Order of Lapu-Lapu Kampilan Medal for her service along with financial assistance from the Office of the President.