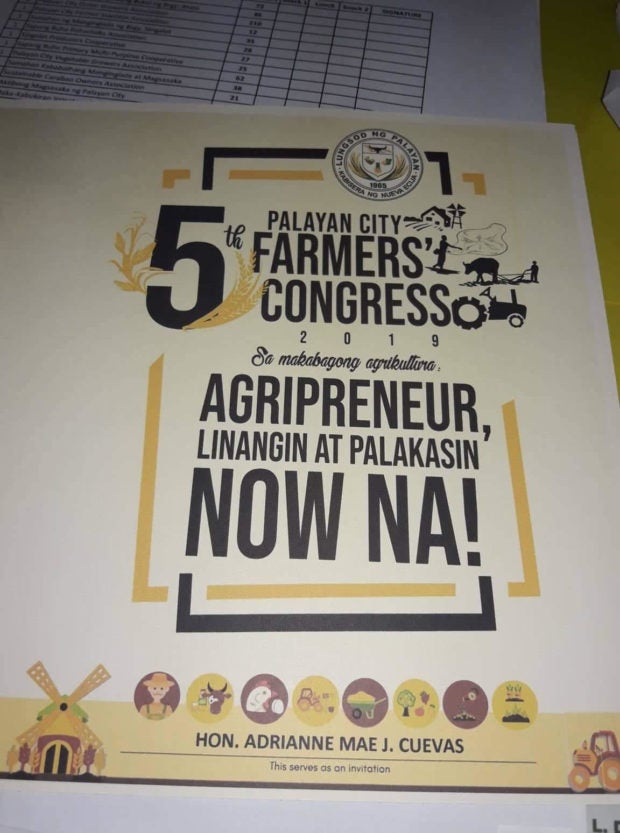 SUSTAINING AGRICULTURE. For five years now, the city government of Palayan brings farmers together for an annual congress where they interact with government officials and experts. CONTRIBUTED PHOTO

MANILA, Philippines – Officials seeking solutions to the impact of falling prices of palay, or unhusked rice, on farmers’ incomes amid a deluge of imports may find answers in a city in Nueva Ecija that has been helping improve farmers’ lives by making agriculture work for people instead of the other way around.

Relief for farmers reeling from the impact of open importation of rice is emerging from Palayan City, which has recently received a P152 million grant from the World Bank, through the Philippine Rural Development Project (PRDP), which is being overseen by the Department of Agriculture (DA).

The grant was part of more than P25 billion that the World Bank allotted in loans and grants for the PDRP and is now seeing results in Palayan, which is now constructing the city’s first onion cold-storage facility worth P190 million after putting in an equity of more than P19 million and getting another P19 million from the national government.

While the programs and campaign being carried out by the city government would directly benefit only farmers in Palayan, what the city is doing may well serve as a national template for a government in search of a way to keep the balance between low rice prices for consumers and sufficient income for Philippine farmers.

For city officials, led by Mayor Adrianne Mae Cuevas, the answer lies not in wave after wave of financial or material aid but where answers could provide lifetime solutions—in the minds of farmers. 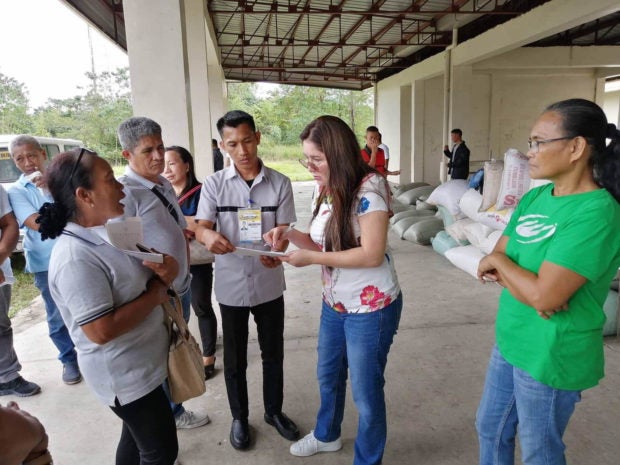 Mindsets are the fields on which these solutions are going to bear fruit. First, to make farmers believe they can do better not only with their most basic tasks in the farm but also with their lives. Second, to give these farmers the invisible tool of knowledge to perform tasks not only in their paddies but also out in the market where their produce need to have value.

“We tell farmers not to belittle themselves,” said the mayor in an online chat with INQUIRER.net. “They’re not just farmers,” she said.

The cold-storage facility, to be operational next year, would free onion farmers from being forced to sell all their produce at depressed prices for fear of spoilage.

With more than 80 percent of funds coming in the form of grants, all the city government has to worry about are funds to maintain the facility once it is completed.

Farmers in Palayan also plant rice and corn but they’re learning now that their paddies are good not only for those traditional crops.

One is to learn how technology could help in farming. While the national government thrust is to equip farmers with implements and mechanize farms, the Palayan City government is adding new knowledge about other crops and the technology to plant and nurture these.

Farmers in Palayan plant rice, corn and onions and are idle in between harvests of these crops. During that pause, the mayor said the farmers could plant other high-value crops that would bring them additional income.

The idea is to make the farms productive all-year-round.

It is doing so with the help of the Department of Science and Technology (DOST), which was a prominent presence at the fifth farmers’ congress in Palayan.

In a report from Philippine News Agency (PNA) Orlando Anselmo, director of DOST in Pampanga, said his office has been giving scientific support to Palayan farmers giving them access to technology that they can apply to farming.

One is access to solar-powered water pumps for irrigation.

Backyard growers of chicken, pigs, ducks and other commercial animals that produce manure now have the knowhow in turning these animal wastes into energy, according to Anselmo.

The Department of Trade and Industry (DTI), according to the PNA report, was also at the farmers’ congress, offering lessons on entrepreneurship to farmers, not to turn them into sellers of used clothes, or ukay-ukay, or other items but for them to be the direct sellers of their produce to end-users.

The cold storage facility under construction with World Bank funding would be central to that objective.

The biggest headache of farmers now is falling prices of their rice harvests. Although it could be considered a band-aid solution, the Palayan City government started buying palay from farmers at prices higher than standard market rates. This would force traders wanting to buy the farmers’ rice harvest to compete for supply by offering higher prices, the mayor said.

This measure, however, is only a short-term solution. Mayor Cuevas knows that for farmers’ lives to improve not only from harvest to harvest but for good, they have to learn new things.

It’s not to wean them away from farming, but to make farming technology-driven and not dependent on guesswork.

Brigida Pili, head of the DTI office in Nueva Ecija, said in a PNA report that Go Negosyo Centers had been established on the ground floor of the Palayan City Hall to provide information and training to farmers, and anyone interested, on starting and running a business.

Pili said that in Palayan, several farmers had already improved their lives by becoming entrepreneurs.

While the number of farmers that can undergo training on the application of technology to agriculture may be limited, the mayor said that over time, their ranks would grow and turn farming not only as a source of daily income but also a career and enterprise for farmers.

“If 40 farmers train now and acquire this new knowledge, that’s a good start,” said the mayor in the online chat. “Forty now, forty next year, forty in the succeeding year and so on, and you’ll have an army of tech-savvy farmers,” the mayor said.

The idea is contained in the theme chosen by the mayor for the fifth farmers’ congress in the city, originally in Filipino—“Sa Makabagong Agrikultura, Agripreneur Linangin at Palakasin Now Na” which roughly translates to “For A Modern Agriculture, Agripreneur Strengthen Now”, agripreneur being the shortcut for agriculture entrepreneur.

At the fifth farmers’ congress were other agencies of government like the Department of Agriculture, Bureau of Fisheries and Aquatic Resources, Philippine Rice Research Institute, Upper Pampanga River Integrated Irrigation System and the Office of the Provincial Agriculturist.

Cows, a carabao, farm equipment and machinery and appliances were raffled off to farmer participants.

City agriculturist Esmonia Lulu said the annual congress was a brainchild of Cuevas to advance the agriculture sector in the city. But while just concerning farmers of Palayan, the city government’s agriculture improvement programs offer the elusive solution to declining farmers’ income and their inability to compete with cheaper imports—a paradigm shift in mindsets.