Israel to UN: Uprooted Jews should be seen as refugees

UNITED NATIONS  –  Israel wants the United Nations to recognize as refugees hundreds of thousands of Jews who fled Arab and Muslim countries in the last century, its U.N. envoy said Tuesday. 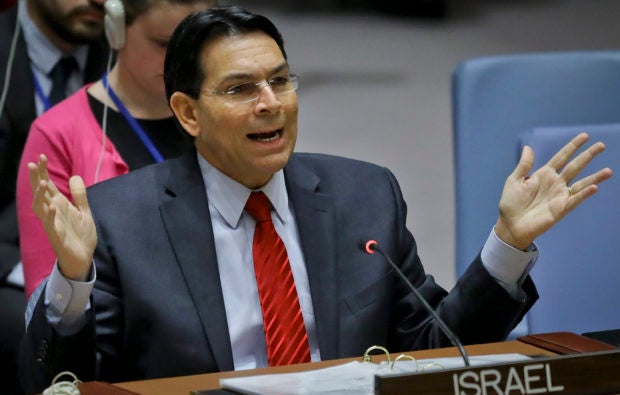 FILE – In this Tuesday March 26, 2019 file photo, Israel United Nations Ambassador Danny Danon addresses the U.N. Security Council, during a meeting on the Palestinian and Israeli conflict at U.N. headquarters. Israel wants the U.N. to recognize as refugees hundreds of thousands of Jews who fled Arab and Muslim countries in the last century. (AP Photo/Bebeto Matthews, File)

Ambassador Danny Danon told the U.N. General Assembly that he plans to propose a resolution about what he called “the ‘forgotten’ Jewish refugees.”

He didn’t detail his planned resolution, except to say that it would “acknowledge the wrong done” to the Jews in question and “make right the injustice that they suffered.”

Palestinian Ambassador Riyad Mansour reiterated appeals for humanitarian aid for Palestinian refugees and said the assembly’s long history of resolutions on the conflict don’t amount to prejudice against Israel.

“It doesn’t work that way,” he told the group.

The remarks came as the assembly weighed, and ultimately approved, resolutions that continue the work of various U.N. components concerned with Palestinian matters and reiterate a roster of longstanding positions on the Israeli-Palestinian issue. One measure includes a call for a stop to Israeli settlement of areas Israel captured in the 1967 Mideast war — a stance given new resonance by the recent U.S. announcement that it no longer believes the settlements violate international law.

Danon said an estimated 850,000 Jews were forced out of Iraq, Egypt, Morocco, Iran, and many other countries during the 20th century after enduring violence and persecution. Many fled to Israel around the time of its establishment in 1948.

The uprooted Jews were absorbed in Israel, where their descendants now make up about half the country’s Jewish population.

The bid for refugee recognition may be largely symbolic at this juncture, but it reflects Israel’s determination to highlight what it considers to be years of pro-Palestinian bias at the U.N., including on the issue of refugees.

An estimated 700,000 Palestinians fled or were forced from their homes during the war. A U.N. agency assists them and their descendants — all told, about 5.5 million people — in the West Bank, Gaza Strip, Jordan, Syria and Lebanon.

The Palestinians and the U.N. see its Relief and Works Agency as a lifeline for impoverished people with no state of their own. International support for it is “an indispensable source of hope and stability until a just solution for the Palestine refugees is realized,” Mansour told the General Assembly on Tuesday.

On the settlements issue, one of Tuesday’s Assembly resolutions stresses a call for “an immediate halt to all settlement activities,” among many other oft-repeated themes. It passed 147-7, with 13 abstentions.

Assembly resolutions are not legally binding or enforceable, but they indicate world opinion.

Hundreds of thousands of Jewish settlers live in the West Bank and east Jerusalem, areas that Palestinians claim for their future state.

The U.N. and the Palestinians say the settlements are illegal and undermine hopes for the long-discussed two-state solution to the Israeli-Palestinian conflict. In 2016, a U.N. Security Council resolution called the settlements “a flagrant violation under international law.”