LONDON – President Donald Trump barreled into a NATO leaders’ meeting on Tuesday aiming insults at French President Emmanuel Macron, slamming “unpatriotic” Democrats at home for holding an impeachment hearing while he is abroad and playing down the impact his domestic troubles are having on his standing on the global stage. 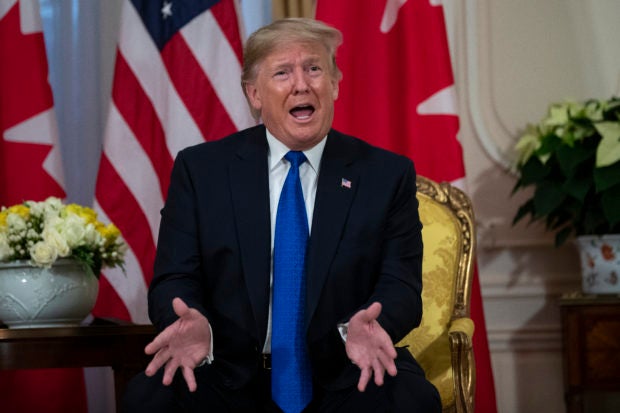 Trump began his first of two days at the NATO conference by rebuking Macron, once arguably his closest European ally among foreign leaders, for recently saying NATO was experiencing “brain death” as a result of diminished U.S. leadership in the alliance under Trump.

Before meeting with Macron on the sidelines of the meeting, Trump laced into the French president for what he said were “very, very nasty” comments.

Hours after the broadside, Macron and Trump sat side by side for a one-on-one meeting. Macron said he stood by his comments about the health of the NATO alliance.

He also firmly expressed his frustration that Trump withdrew hundreds of American troops from Syria in October.

The decision by Trump, made without consulting NATO allies, gave Turkey, another NATO member, a green light to launch operations against Syrian Kurdish forces who played a key role in the fight to clear a huge swath of Syria of the Islamic State.

Trump and Macron have had an up-and-down relationship in the nearly three years Trump’s been in office.

Macron, who early in Trump’s presidency had looked to cultivate a close relationship with Trump, hosted Trump in 2017 for Bastille Day celebrations in Paris. Trump reciprocated by honoring Macron last year with the first state visit of a foreign leader during his time in the White House.

But the relationship has been put under new stress in the aftermath of Trump pulling out U.S. troops from Syria without coordinating with France and other NATO allies.

As they answered questions from reporters, the chasm between Trump and Macron was most apparent as they discussed their concerns over Turkey’s plan to purchase an anti-aircraft system from Russia.

Macron said there is a disconnect in allowing Turkey to buy an anti-aircraft S-400 missile system from Russia and also be a NATO member. Trump said he is weighing issuing sanctions against Ankara if they move forward with plans to buy the weapons.

Ahead of the meeting, President Recep Tayyip Erdogan said he would oppose a NATO plan to defend the Baltic region if the alliance does not back Turkey over its fight against Kurdish groups it considers terrorists.

“I’m sorry to say we don’t have the same definition of terrorism around the table,” Macron said in a swipe at Turkey.

Trump showed a measure of deference to Erdogan, noting that Turkey was “very helpful” during an October U.S. special commando raid that lead to the death IS leader Abu Bakr al-Baghdadi near Syria-Turkey border.

At another point in their extended comments before the news media, Trump and Macron had a curt exchange about the repatriation of Islamic State fighters who are European citizens and were captured in Syria and Iraq in recent years. Trump has pressed unsuccessfully for European nations to accept fighters captured by U.S. forces.

“Would you like some nice ISIS fighters? I can give them to you,” Trump said. “You can take every one you want.”

“Let’s be serious,” Macron responded. “Your number one problem are not the foreign fighters.”

Trump retorted, “‘That’s one of the greatest non-answers I’ve ever heard. And, that’s OK.”

Trump criticized Democrats at the outset Tuesday, calling the impeachment push by his political rivals “unpatriotic” and “a bad thing for our country.”

Trump, who initially commented while meeting with NATO Secretary-General Jens Stoltenberg, is upset that Democrats scheduled an impeachment hearing while he is abroad.

The House Judiciary Committee has set a hearing on the constitutional grounds for Trump’s possible impeachment on Wednesday just before the NATO summit concludes.

“I’m not even thinking about it,” Trump said anew Tuesday.

Democrats contend Trump abused his presidential powers by holding up the aid to pressure Ukraine President Volodymyr Zelenskiy to investigate meddling in the 2016 U.S. presidential election and former Vice President Joe Biden and his son, who had a seat on the board of Ukrainian energy company.

Trump was adamant that the cloud of impeachment wasn’t undercutting his negotiating position on the international stage.

“I know most of the leaders,” Trump said. “I get along with them. It’s a hoax. The impeachment is a hoax. It’s turned out to be a hoax.”

Trump also lashed out at France for a French digital service tax that he said unfairly discriminates against U.S. tech companies, including Google, Apple, Facebook and Amazon. There is no direct effect on the United States from the French tax, which only applies to the tech companies’ revenues in France, not the United States.

Robert Lighthizer, the chief U.S. trade representative, on Monday recommended $2.4 billion in new tariffs on French cheese, wine, and other products to retaliate for the digital tax.

Trump suggested during an appearance with Canadian Prime Minister Justin Trudeau that he may look at unspecified trade action against NATO allies that perpetually fall well below the 2% benchmark for defense spending. He noted that some nations are “way below 1% and that’s unacceptable.”

White House officials did not immediately respond to questions about how fully Trump has weighed taking such action or which countries he would seek to target.

Trump and his wife Melania later visited Buckingham Palace for a leaders’ reception hosted by the queen. Protesters could be heard chanting nearby. The Trumps earlier joined Prince Charles and his wife, Camilla, for tea at Clarence House, a British royal residence.