Over 200 families evacuated in Metro Manila due to ‘Tisoy’ 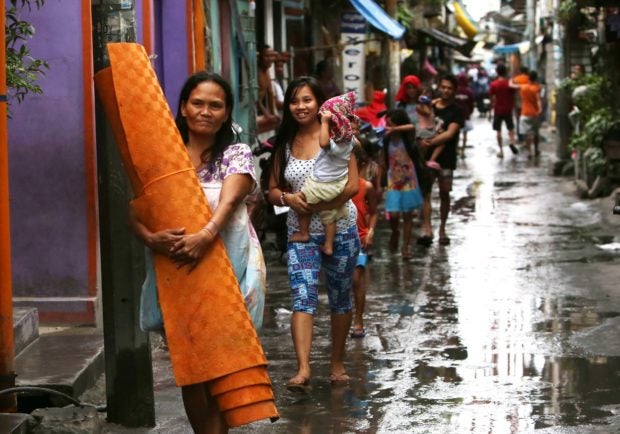 SHELTER FROM THE STORM Residents of Isla Puting Bato in Tondo, Manila are herded to safety in preparation for the onslaught of Typhoon “Tisoy.” —MARIANNE BERMUDEZ

MANILA, Philippines — As Metro Manila and nearby provinces braced for the onslaught of Typhoon “Tisoy” (international name: Kammuri) on Tuesday, over 200 families in Quezon City, Manila and Valenzuela living in high-risk or low-lying areas were evacuated.

Surprisingly, residents were staying put in Marikina City — which bore the brunt of Tropical Storm “Ondoy” in 2009 — although the local government said that shelters had been readied just in case.

As of 4:30 p.m., the water level at Marikina River was still at 11 meters, far from the critical mark that would prompt people living near its banks to leave their houses.

Under the city’s alert system, the first alarm would be at a level of 15 meters, under which residents would prepare for evacuation. The second alarm, at 16 meters, would mean moving to designated centers followed by forced evacuation at 18 meters.

In Quezon City, 42 families in the high-risk areas of Barangays Bagong Silangan and Roxas were forced to head for designated shelters as winds and rains due to Tisoy began picking up around 10:30 a.m.

“Since our alert level was raised from yellow to orange which is used in critical moments, we had activated our command center to respond to incident reports from communities and to assist them in evacuation,” said QCDRRMC director Myke Marasigan.

“Our emergency operations center will also be operating 24/7 until the typhoon’s exit,” he added.

The social services department was tapped to provide relief and temporary shelter, such as clean and modern tents, to families who would be asked to evacuate.

Barangay covered courts were also equipped to hold more than 5,000 people affected by the typhoon.

“Among the families’ immediate needs are food and water, as well as shelters that have partitions because we want to give them privacy even though they are in evacuation centers,” Marasigan said.

According to him, they will continue to monitor rising water levels in rivers that may affect the city, such as Tullahan, Marikina and San Juan rivers.

As of 4 p.m. Tuesday, a total of 35 families or 121 individuals from four barangays in Valenzuela City were forced to evacuate.

The city government earlier in the day raised Siren Alert Level 2 as it urged several barangay chairs to conduct preemptive evacuations in low-lying areas before floodwaters rise due to Tisoy.

Residents did not have to worry about leaving their pets at home as the city’s evacuation centers also had areas for animals.

According to the Valenzuela Flood Control Division, the water level at the nearby Meycauayan River was at 10.85 meters at 10:30 a.m., still far from the critical level of 11.50 meters.

In Manila, 145 families or over 700 individuals from Isla Puting Bato in Tondo were preemptively evacuated.