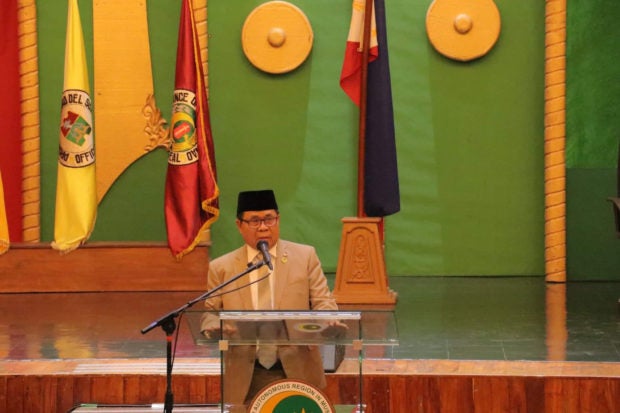 BARMM Chief Minister Ahod Al Haj Murad Ebrahim said the BARMM’s education ministry should work to ensure that no Bangsamoro child would left behind in terms of education after he signed into law the region’s 2020 budget. CONTRIBUTED PHOTO

COTABATO CITY –– “Every child in the Bangsamoro should be in school.”

Princess Bai Maleiha B. Candao, a member of the Bangsamoro Parliament, said this was the message that next year’s approved budget for the Bangsamoro wished to impart by giving education its top priority in the P65.6-billion budget that the Bangsamoro Transition Authority (BTA) approved during the November 30 session here.

Candao said education would be getting P19 billion or 29.23-per cent of the total approved budget for next year.

The amount is so far the biggest share among all other sectors of the regional government, she said.

“With this budget, BARMM is sending a message that every Bangsamoro child should be in school,” Candao said in a statement.

Forty-eight members of the Bangsamoro Parliament voted “yes” for BTA Cabinet Bill No. 31 titled, “An Act appropriating funds for the operation of the Bangsamoro government from January 1 to December 31, 2020, and other purposes” against one who voted, “No” and five who abstained.

Ebrahim said he was honored to be the first Bangsamoro Chief Minister to have read the document, titled the 2020 Bangsamoro Expenditure Programs (BEP), he considered to be the “fruit of more than five decades of struggle of the Bangsamoro.”

He said the largest share in the 2020 BEP would be for the education sector to ensure that no Bangsmoro child would be left behind as far as education was concerned.

Under the proposed national government’s budget for next year, BARMM would get an allocation of P70.6 billion, including the P63.6-billion block grant provided under the Bangsamoro Organic Law.

The remaining funds of P5 billion would be for a special development fund and P2 billion as the region’s share in national taxes.

BARMM, composed of the provinces of Maguindanao, Lanao del Sur, Basilan, Sulu and Tawi-Tawi, cities of Cotabato, Marawi and Lamitan, and the 63 villages from Cotabato provinces, which earlier opted to join the expanded autonomous government, will start receiving a block grant starting 2020.

“Behind these numbers are the blood, sweat, and tears of our people. We must, by all means, give justice to the sacrifices of our people,” Ebrahim said during the “Minister’s Hour” of the BTA sessions.

“We can do so by using our respective budget without an iota of greed and corruption,” he added.