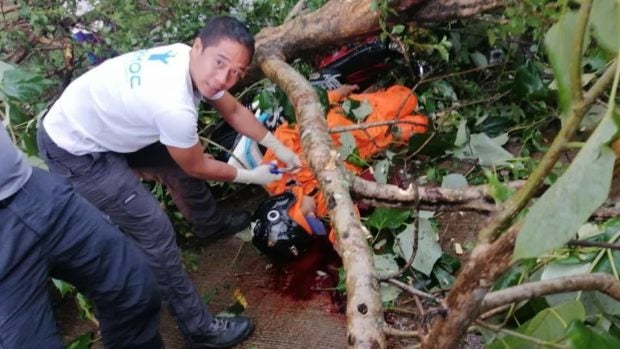 A member of the Ormoc Rescue Group rescues Joel Baledio who was pinned down by tree branches in Barangay Boroc. CONTRIBUTED PHOTO

ORMOC CITY –– A 38-year-old construction worker died after branches of a tree fell on him due to strong winds brought by Typhoon “Tisoy” around 4:30 p.m. on Monday.

Machete, in a telephone interview, said the victim’s employer allowed him to go home early as strong winds brought by Tisoy started to batter the city.

While driving his motorcycle, branches of a Gemelina tree fell on Baledio.

The Ormoc Rescue Group brought him to the hospital but he was declared dead on arrival by the attending physicians.