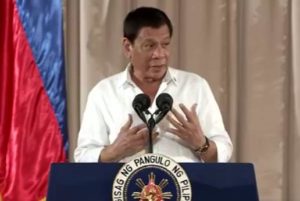 MANILA, Philippines—President Rodrigo Duterte has reorganized the commission monitoring the movement of visiting foreign military forces in the country, relegating its chairmanship to the Department of Foreign Affairs (DFA) secretary.

In an Executive Order 97 dated Nov. 29, Duterte also made the Presidential Commission on Visiting Forces (PCVF) an attached agency to the DFA, but with oversight coming from the Office of the President.

In ordering the reorganization, the President cited the need to “further ensure an effective integration of its functions with the Government’s independent foreign policy.”

Duterte’s new EO repeals EO 175 in 2014 that previously placed the commission under the Office of the President with the Executive Secretary as chairman.

PCVF is the lead inter-agency mechanism that provides policy coordination and advice, guidance, and assessment to ensure that all Status of Forces Agreements (SOFAs) serve the national interest.

The National Security Adviser and a representative from the Office of the President were added as members of the commission.

Other members of the commission were the secretaries of National Defense, Justice, Social Welfare and Interior and Local Government, Presidential Commission on Visiting Forces Agreement executive director, and a representative from the private sector.

The new EO also mandated the President to appoint an Executive Director upon the recommendation of the DFA and the Department of National Defense (DND).

The Executive Director must be a senior government official with the rank of at least an assistant secretary. He will be mandated to report directly to the Chairman of the Commission.