MANILA, Philippines —  Senate  President Vicente “Tito” Sotto III believes that the country’s hosting of the 30th Southeast Asian Games is “in order” and “thought of”, despite several reported glitches, logistical and other problems before the formal start of the biennial games.

The  SEA Games will run until  December 11. 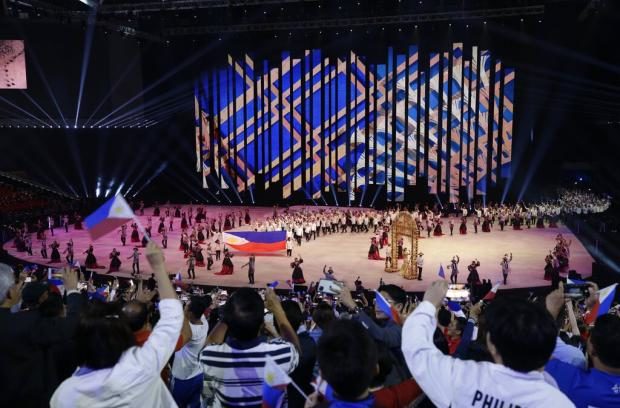 The crowd reacts as members of the Philippine team walk during the opening ceremony of the 30th Southeast Asian Games at the Philippine Arena in Bulacan on Saturday, Nov. 30, 2019. (Photo Aaron Favila / AP)

“Kahit sabihin mo pang may nagda-dialogue na delay daw yung budget,  na delay daw sila (Even  there  are   people  saying the budget [for the SEA Games] had been delayed), still, the preparations were enough for the country to be happy about the results.  They  are honored  to be Filipinos…”

President  Rodrigo Duterte, however,  believed there were shortcomings in the country’s preparations, despite the  P6 billion budget allocated.

“Well, I am not attributing it to anybody, but you know, it’s a huge fund and there ought not to have problems,” the President earlier said.

Told about Duterte’s statement,  Sotto insisted that many of the reported problems were said to be fake news.

And  Duterte would probably realize it too, later on, Sotto said.

Still,  Sotto believed there should be an accounting of the budget spent on the event.

But he said criticisms on the production of the SEA Games opening ceremonies and the P50 million budget for the cauldron should be set aside.

The accounting or reporting could be conducted by the organizing committee,  the Philippine Sports  Commission, or by the Committee on Finance of the Senate or the House of Representatives.