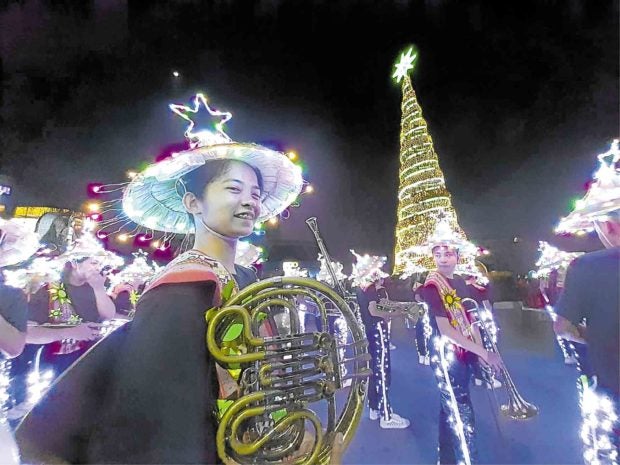 Since Nov. 12, the Quintos and Magsaysay bridges that cross the Pantal River sparkle with colorful lights that come in shapes of “bangus” (milkfish), waves, stars and Christmas balls.

Several couples have held their prenuptial and predebut shoots under an arc of lights in the middle of the Quintos Bridge and along a tunnel of lights at the city plaza.

When the clock strikes at 6 p.m., people flock to these bridges for a selfie, which inspired the City Hall to launch a mobile phone photo contest.

“We did not expect the massive influx of people but we are happy that it is being appreciated by Dagupeños and Pangasinenses alike,” said Mayor Brian Lim.

In Bayambang town, residents and visitors troop to the town plaza to watch a Christmas display that features Disneyland characters.

At the center of “Disneyland sa Bayambang” is an animated display that depicts the birth of Christ Jesus and other Filipino traditions on Christmas season.

Bayambang Mayor Cezar Quiambao said the “Paskong Disney” was for “every child and those who are child-at-heart.”

Dubbed “An Enchanting Baguio Christmas,” the city’s yuletide programs were designed to be tourism-drawing activities “at par with other big-ticket, city-directed and city-supported events such as the Panagbenga Baguio Flower Festival,” said filmmaker Ferdinand Balanag, who curated the Christmas project.

Baguio’s peak tourism season starts in December and continues until February because of the cooler temperatures.

Balanag said the Enchanting Baguio Christmas aimed to “propagate a culture of responsible tourism, and promote our culture, our creative arts, folklore and traditions.”