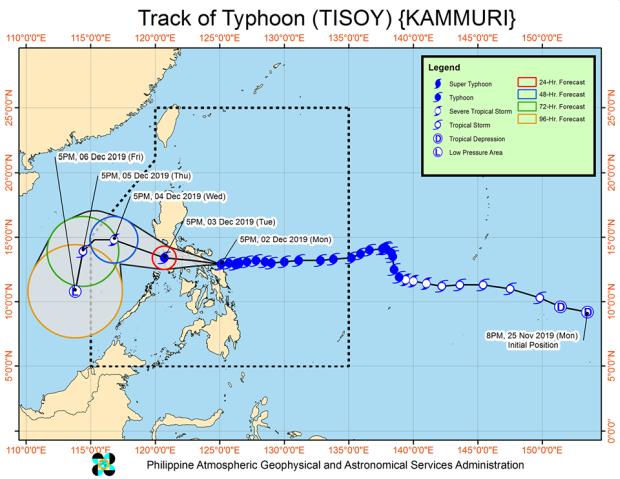 MANILA, Philippines — An intensified Typhoon Tisoy is expected to make landfall over Sorsogon on Monday night, according to the Philippine Atmospheric, Geophysical and Astronomical Services Administration (Pagasa).

According to the 8 p.m. bulletin of Pagasa, the eye of Tisoy was located 90 km east of Juban, Sorsogon.

The intensified with maximum sustained winds of 165 kph near the center and gustiness of up to 230 kph.

It is moving west steadily at 20 kph.

Tisoy is expected to make landfall over Sorsogon in the next 3 hours.

Tropical Cyclone Wind Signal No. 3 – which means that winds blowing from 121 to 170 kph are prevailing or expected in 18 hours — was raised over the following areas:

Signal No. 2 — which means winds blowing from 61 to 120 kph are prevailing or expected in 24 hours — was raised over the following areas:

Signal No. 1 —  which means winds blowing from 30 to 60 kph are prevailing or expected in 36 hours — was raised over the following areas:

Frequent to continuous heavy to intense rainfall is expected over the Bicol Region, Northern Samar, Southern Quezon, Marinduque, and Romblon between Monday night and Tuesday morning.

Frequent to continuous heavy rains are also expected over Samar, Eastern Samar, Rizal, rest of Quezon, Laguna, and Oriental Mindoro, while moderate to intermittent heavy rainfall is over Metro Manila, Occidental Mindoro, the rest of Calabarzon, Cagayan, Isabela, Aurora, and the rest of Eastern Visayas.