MANILA, Philippines — The Metropolitan Manila Development Authority (MMDA) on Monday assured that it is ready for the onslaught of Typhoon Tisoy  which is expected to spawn heavy rains in parts of Southern Luzon. 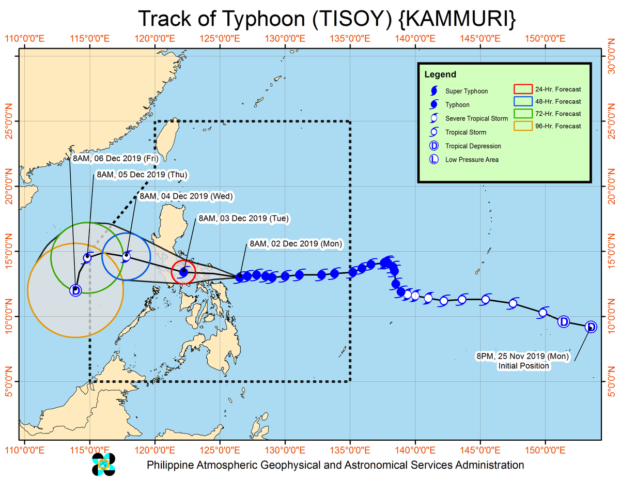 (We assure you that we are 100 percent ready. The MMDA’s four quadrants are ready for deployment anytime)

(The DILG and the DPWH, I think, have started removing billboards and the DILG has also advised local governments, and if we can recall, many of the LGUs in Metro Manila have already suspended classes).

In terms of flood control, Garcia said all pumping stations in Metro Manila are functioning.

“As of now, the MMDA has 61 pumping stations all over Metro Manila. These water pumps are expected to help alleviate flooding,” Garcia said.

(In terms of the sewerage system, we’ve been preparing for it since summer. Whether or not there’s a typhoon coming, our flood control team always cleans it).

Garcia further said that the MMDA is closely coordinating with local government units  and the Metro Manila Disaster Risk Reduction and Management Council (MMDRRMC) in case rescue units need to be deployed to certain areas.

It has a maximum sustained winds of up to 150 kilometers per hour (kph) and gustiness of up to 185 kph.

Tisoy is expected to make landfall over Catanduanes or Albay between Monday night and early Tuesday morning, the state weather bureau said.

It is expected to exit the Philippine area of responsibility (PAR) on Thursday morning.

Read Next
CPP orders NPA to help victims of typhoon in Quezon
EDITORS' PICK
PH preps for China virus: Question of when, not if
Beyond water service: Maynilad builds massive infrastructure projects to clean up Metro Manila waterways
Museums ‘put to sleep,’ churches closed amid volcano’s unrest
Seventh judge assigned to handle De Lima case
SM continues to send relief assistance to remote towns in Batangas
Get exciting deals and discounts when you download the new McDonald’s App
MOST READ
Taal Volcano flexes signs of restiveness anew
Passengers from Wuhan, China to be flown out of Kalibo, Aklan – CAAP
Part of Aurora Boulevard in Cubao closed from Jan. 25 – Feb. 1
Lacson on Duterte’s threat to end VFA over Bato’s canceled visa: Where is the connection?
Don't miss out on the latest news and information.