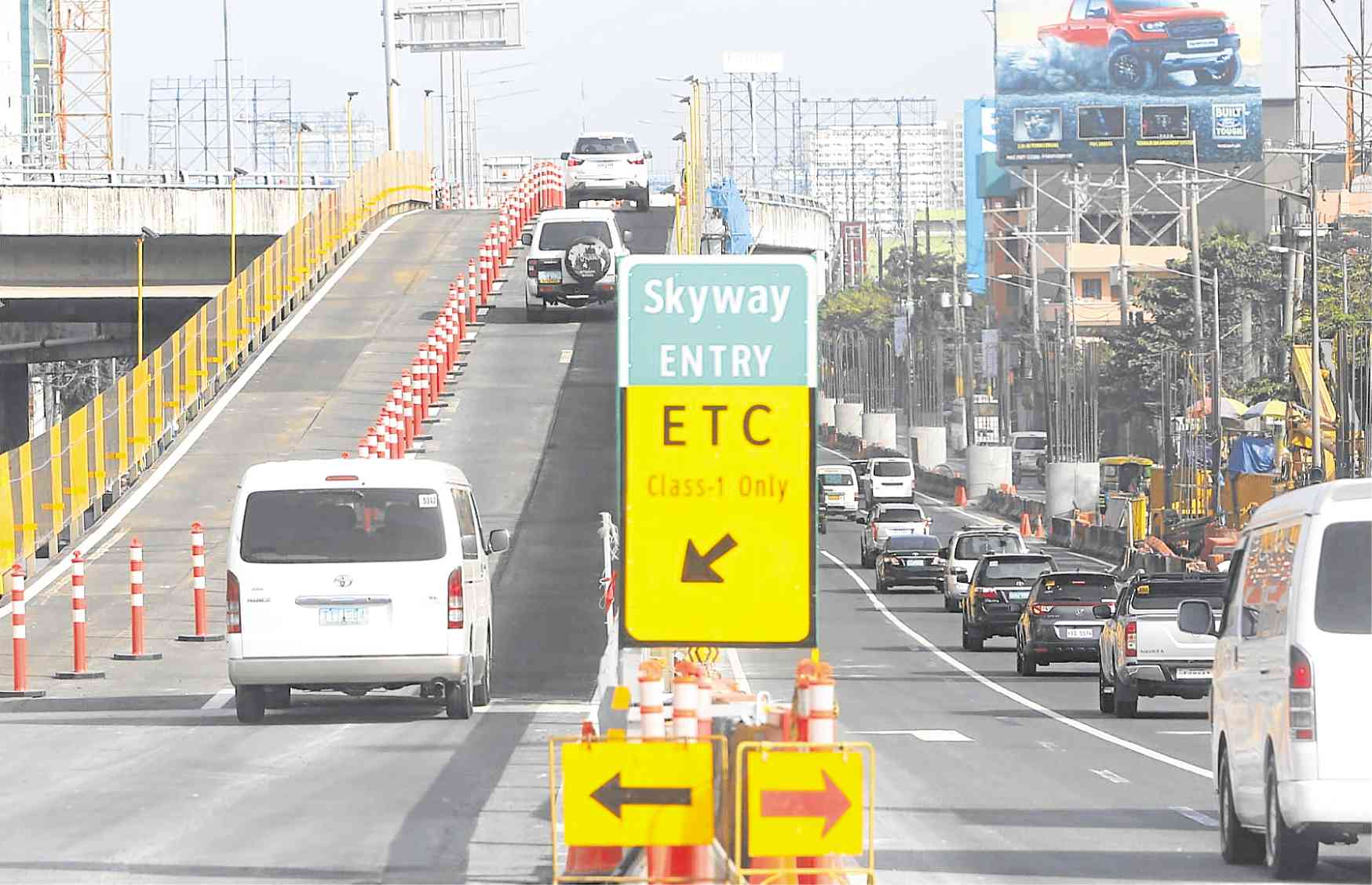 SKYWAY RAMP Northbound Class 1 vehicles with RFID can now use the newly opened steel ramp connecting the middle of the viaduct to Skyway’s ramp. —MARIANNE BERMUDEZ

MANILA, Philippines — San Miguel Corp. (SMC) restored “normal traffic” at its southern Metro Manila toll road network on Sunday as the government reconsidered imposing penalties on the company for the “carmageddon” that ensued after the Skyway extension project began in late September.

As promised by SMC president Ramon Ang, the food and infrastructure conglomerate reopened the third at-grade northbound lane of the Skyway tollroad shortly after the Alabang viaduct in Muntinlupa City.

SMC Tollways also inaugurated a northbound two-lane steel ramp connecting the middle of the viaduct to Skyway’s elevated concrete ramp for vehicles coming from Alabang-Zapote Road going to Makati City, but only for Class 1 vehicles with radio frequency ID (RFID).

The closure of the northbound lane, which worsened vehicular congestion starting on the night of Sept. 24, was prompted by the start of construction of the P10-billion Skyway extension project.

An adjacent lane of the two-lane east service was closed days later.

The 4-kilometer project will further ease traffic by extending the Skyway from Barangay Cupang to Barangay Putatan, which will run parallel to both sides of the South Luzon Expressway (SLEx).

“Starting today, motorists from SLEx will have up to five lanes northbound during rush hours. This is already a big improvement from just three lanes at the viaduct, before the start of construction,” Ang said on Sunday.

True enough, northbound traffic was observed flowing freely on the viaduct around 2 p.m. on Sunday, and cars with RFID were taking the new steel ramp.

Ang explained that SMC had rushed to start work on the Skyway extension project to ensure the completion of preliminary works by Dec. 1, or ahead of the Christmas season, when road congestion peaks.

The heavy traffic burden on motorists prompted the Toll Regulatory Board (TRB) to study penalties in the form of a toll discount.

A TRB technical working group earlier recommended a discount of P44 on the section most affected by the gridlock. Most affected were residents of southern Metro Manila and those from Laguna, Cavite, Batangas and other southern provinces in Luzon.

On Sept. 26, for instance, the carmageddon on SLEx backed up traffic 24 km, from Alabang to the Eton exit in Santa Rosa City, Laguna, causing commuters to report for work late, or worse, to miss appointments or flights.

Many had to wake up hours early to take into account the longer travel time so they could get to work on time.

There are even anecdotes of some millennials living in Laguna who have resigned from their white-collar jobs in Makati or BGC in Taguig because of the “soul-crushing” daily traffic congestion.

Raymundo Junia, private sector representative on the five-member TRB and head of the technical working group, said his proposal to refund motorists was retroactive from Sept. 25.

TRB executive director Abraham Sales said on Sunday the discount “did not push through” and would be subject to further talks in a board meeting two weeks from now.

Sales said the board would consider whether the penalty would be “mooted” because of the reopening of the lane and whether they had legal basis to impose a discount. “We reviewed the contract and we could not find any [basis].”

Ang has rejected toll cuts, claiming that these were unwarranted and would erode investor confidence in the conglomerate. But he has apologized for the horrendous traffic brought about by the Skyway extension project.

Joining Ang at the ceremony on Sunday were Tugade, Villar and Muntinlupa Mayor Jaime Fresnedi.

Ang cited their help with opening the road project. He said the Department of Public Works and Highways had lent SMC construction materials for the steel ramp.

Traffic volume on SLEx increases every year because of the surge in the number of subdivisions in Cavite, Laguna and Batangas, Ang earlier said.

Read Next
Arson eyed in burning of Zambo del Sur court
EDITORS' PICK
Bongbong Marcos says PH ‘open for business’ with new Clark Airport terminal
Individuals affected by ‘Karding’ now over 157,000
Newbie gamers are in for a treat with the power-packed feature of vivo Y16
Karding damage to infrastructure at P23M
House energy committee chair Arroyo bats for cheap electricity
Reignite your passion with the vivo Y35
MOST READ
Angelica Panganiban ‘duguan, sugatang mom’ one week into breastfeeding
LPA enters PAR, may develop into tropical depression
Badoy not with Office of the President, NTF-Elcac, under Marcos admin — solon
Charges readied vs gov’t guard with P290-M deposits
Don't miss out on the latest news and information.