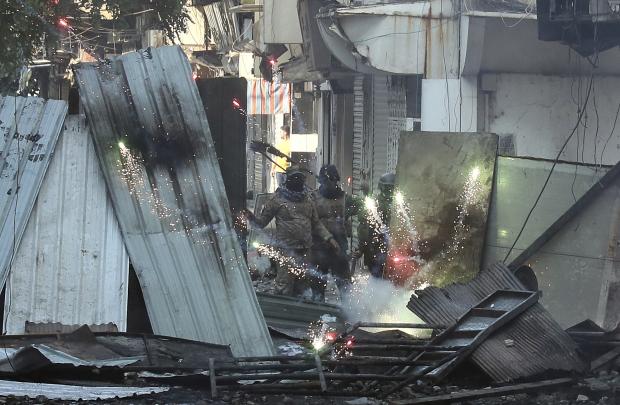 BAGHDAD — Iraq’s parliament approved the resignation of Prime Minister Adel Abdul-Mahdi on Sunday, amid ongoing violence and anti-government demonstrations in the capital that saw one protester shot dead.

Protesters also continued to close roads, including those leading to a major commodities port, in mass demonstrations in southern Iraq.

Parliament enacted Abdul-Mahdi’s resignation without putting it to a vote, according to two lawmakers in attendance. Existing laws do not provide clear procedures for members of parliament to recognize the prime minister’s resignation. Lawmakers acted on the legal opinion of the federal supreme court for Sunday’s session.

“According to the federal court’s interpretation there is no need to vote,” said lawmaker Sarkwat Shamsedine, during the session.

Lawmaker Mohamed al-Daraji said that parliament faced a “black hole in the Constitution” that didn’t clearly set out how members of parliament should deal with a premier’s resignation.

Security and medical officials say one protester was killed and ten wounded in Baghdad’s historic Rasheed Street, when security forces fired live ammunition to prevent crowds from breaching concrete barriers near the Ahrar bridge that leads to Iraq’s parliament and other government buildings. The officials spoke on condition of anonymity, in line with regulations.

Anti-government demonstrators, including students and teachers, also took to the streets in the southern oil-rich city of Basra early morning Sunday. They donned black clothes to mourn protesters killed in Najaf and Dhi Qar provinces in recent days.

At least 400 people have been killed since Oct. 1, when thousands took to the streets in mass protests in Baghdad and the predominantly Shiite south. Security forces have used live fire and tear gas to repel protesters creating heavy casualties.

ADVERTISEMENT
Read Next
UN chief warns of ‘point of no return’ on climate change
EDITORS' PICK
Smart releases Hyun Bin’s second TVC
Current dominant strain of COVID-19 more infectious than original—study
Water remains our saving grace right now
DOLE: Return of OFWs’ remains from Saudi to be ‘delayed,’ deadline moved to ‘early next week’
‘Justice will be done,’ Duterte assures as he vowed probe on Jolo incident to bare ‘truth’
EuroMillions Superdraw: A lottery draw unlike any other is coming to the Philippines
MOST READ
BREAKING: Duterte signs anti-terror bill into law
Locsin warns of ‘severest response’ if China’s army drills in SCS ‘spill over’ to PH domain
Duterte to PNP, AFP: I’m pleading for calm, understanding over Sulu incident
Converge ICT applies for P35.9B IPO
Don't miss out on the latest news and information.