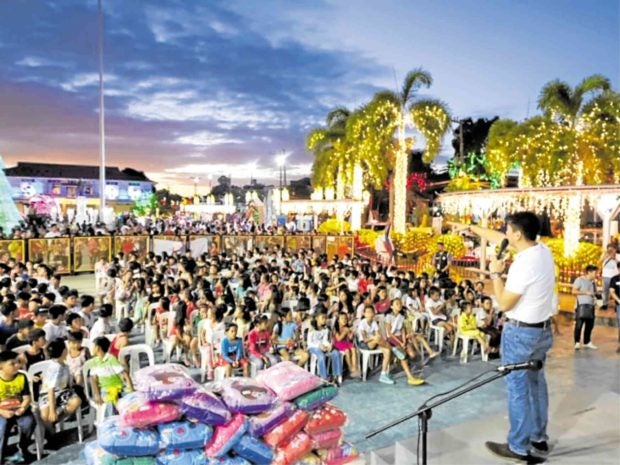 At sundown, on a humid Friday in 2016, children gathered at the city plaza of Imus in Cavite province, to listen to the story, “Si Taktu.”

They sat on the floor, legs crossed, as city librarian Rose Roman read the book about a young boy who hated taking a bath.

“Kwentuhan sa Plaza,” a storytelling project of the city library and the City Parks and Historical Sites, aims to instill values among children while nurturing a community with a penchant for reading.

As city librarian for 27 years, Roman thought of the project one day as she was looking over the plaza from the lonely, dusty library that rarely had any visitors.

The plaza, meanwhile, bursts into life every afternoon, with children playing on the street next to the statue of local hero, Gen. Licerio Topacio, and the picturesque Our Lady of the Pillar Cathedral as backdrop. 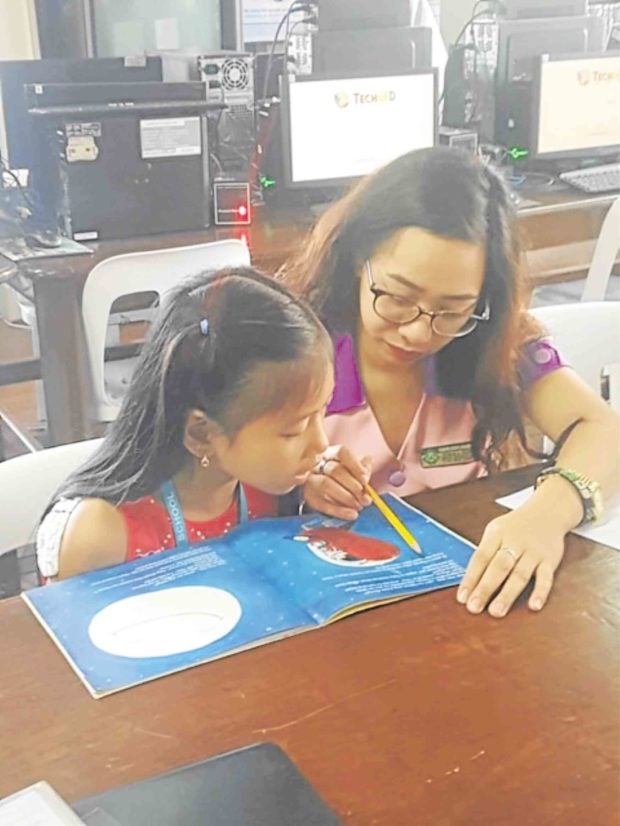 Roman remembers the first few sessions with just about 20 listeners and a measly budget of P25 per child for snacks—juice paired with “mamon” (sponge cake).

What began as a sunset storytelling habit, held every first Friday of the month, turned into a regular event that children looked forward to.

Word got out quickly that few months later, the audience grew to between 80 and 100 children. Some even came from adjacent cities that they had to provide Monobloc chairs and a better sound system, Roman says.

“Kwentuhan sa Plaza” never ran out of volunteer storytellers—first, the mayor and the government employees,  then schoolteachers, police officers, firefighters and members of nongovernmental organizations.

Each had his own gimmick to make reading more interesting, like for instance, littering the plaza with pairs of slippers when they read the story, “Ako si Kaliwa, Ako si Kanan,” whose characters were a pair of footwear.

When they had a story about brushing teeth, volunteers gave away toothbrushes to the children.

“It has truly become [a] community engagement with [different] sectors getting involved,” Roman says.

To check whether the children has learned a thing or two, the storyteller picks one kid to answer a question about the story. 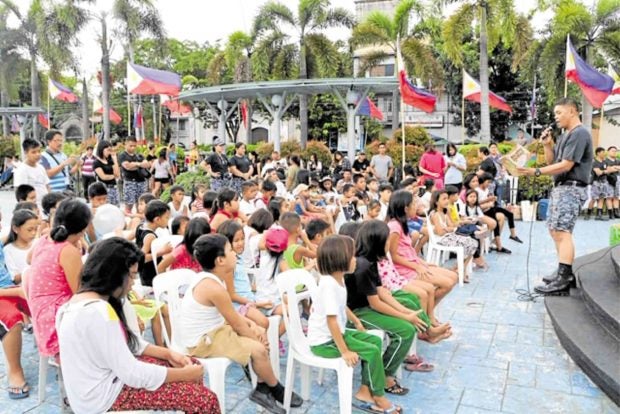 SHARING TIME A jail officer reads a storybook to Imus children. Among the program’s volunteers are policemen, firefighters and members of civic organizations. 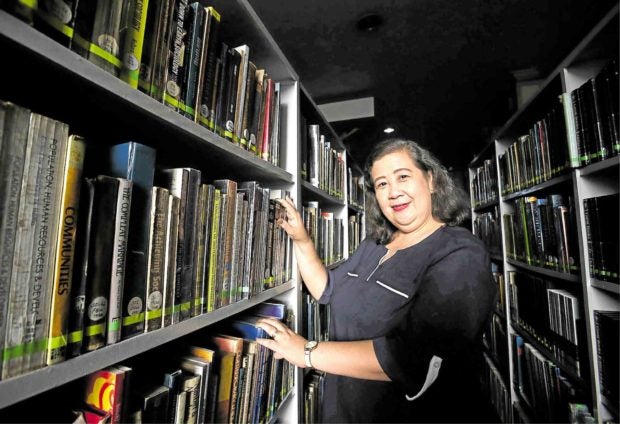 Imus, with a population of 403,785 today, is one of Cavite’s earliest administrative units and economic centers. It also has the highest literacy rate (basic reading and writing) in the province at 99.78 percent in the last four years.

The public library dates back to the 1950s. It used to operate near the public market until former Imus Mayor Erineo Maliksi ordered the construction of a building to house the library in 1986.

In 2004, a big fire gutted a portion of the city hall. The library had to temporarily give up its space to other government departments that lost their offices to the fire.

From its temporary location in a public school after the fire, the library transferred back to its former building after the city hall was reconstructed about five years ago.

Roman recalls a time when the books were already too old and worn out, their only purpose was as something the security personnel would sleep on.

“We often think of school librarians just as someone who lends out books. But when you’re in government, it becomes a lifelong [task of ensuring] the community’s intellectual growth,” she says.

Aside from “Kwentuhan sa Plaza,” the city library started a summer reading program for out-of-school children in 2017.

Roman says about 30 children would be chosen to attend a total of 15-hour session with student volunteers from Cavite State University to help the “slow readers.” 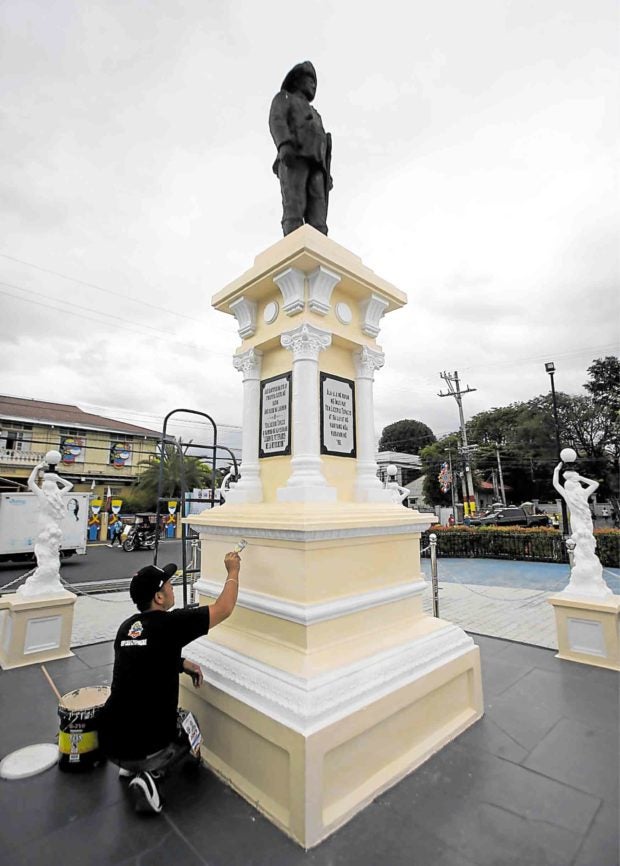 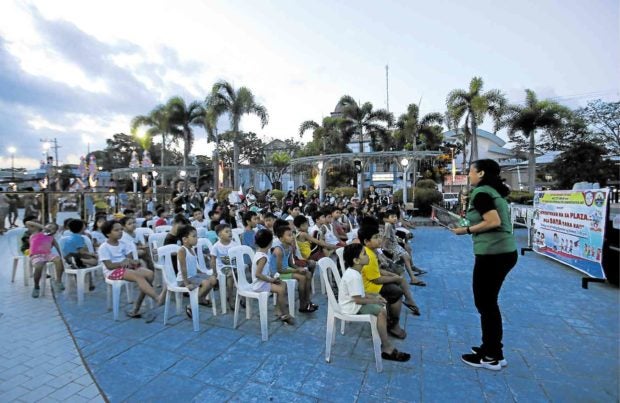 Roman is starting to see the library come back to life. “In this kind of job, you really need the passion, otherwise, nothing comes out of it,” she says.

The city library, she says, is working with barangay officials to build their own reading centers and hold their own storytelling sessions.

The “kwentuhan” lives on from the plaza to across the city.