LUCENA CITY –– The spokesman of the Communist Party of the Philippines (CPP) strongly refuted the claim of the military that the arrest of rebel leader Jaime “Ka Diego” Padilla is causing mass panic among Maoist-inspired guerrillas in the region.

“The mass panic claim was baseless. His capture further strengthens the NPA’s unity as they denounce the injustices against Ka Diego and violations of his rights,” Marco Valbuena, CPP chief public information officer, said in an online interview on Friday.

But he admitted that the arrest of Padilla, New People’s Army (NPA) in Southern Tagalog was a “loss and setback” to the communist rebels in the region.

“But this is far from causing serious losses to the NPA,” he insisted. 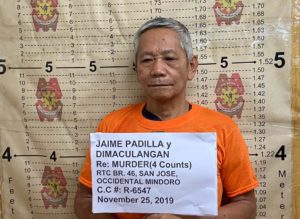 Jaime Padilla, an alleged leader of the New People’s Army, poses for a mugshot after he was arrested for multiple murder in San Juan City on Monday, November 25, 2019. Photo from NCRPO

On Thursday, Lt. Col. Dennis Cana, spokesperson of the military’s Southern Luzon Command (Solcom), alleged that the arrest of Padilla and other key NPA leaders and the ongoing mass surrenders of Red fighters “were creating mass panic and confusion among their ranks.”

Cana also claimed that Padilla’s capture was the result of information on his health condition, which was provided by his comrades along with other crucial data from concerned citizens.

“The claims that the NPA itself revealed Ka Diego’s conditions is pure hogwash and a desperate effort to sow intrigue,” Valbuena stressed.

He added: “As a high profile NPA representative, Ka Diego was fully aware of the high-security risk when he sought medical treatment in a Manila hospital.”

Padilla, 72, was arrested on Monday evening at the Cardinal Santos Medical Center in San Juan City, where the NPA leader was supposedly confined due to hypertension.

He was arrested under a warrant issued by the Regional Trial Court Branch 46 of San Jose, Occidental Mindoro.

Valbuena assailed the actions of the government to hide Padilla from his lawyer and family and called it an outright violation of the rebel’s right.

“The fact that his lawyers have been denied access to provide him legal assistance is clear evidence that Ka Diego’s rights are outrightly being violated by the police,” he said.

Valbuena said they have reason to be seriously concerned about his well-being considering he was undergoing medical treatment when he was arrested.

But Cana denied that the government was hiding Padilla and insisted that Padilla would soon be presented to the court that ordered his arrest.

Valbuena reiterated the CPP stand that Padilla is a “peace consultant” and thus, his arrest was a violation of the Joint Agreement on Safety and Immunity Guarantees (Jasig) between the government and the National Democratic Front of the Philippines (NDFP), the political arm of the communist insurgents.

Jasig, signed by the government and NDFP panels in 1995, is supposed to protect from arrest and other harassments negotiators from both sides who are taking part in the talks.