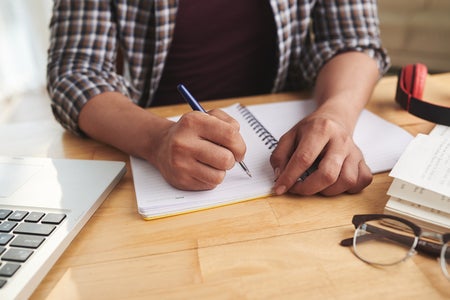 A homeless man who yelled at a Ukrainian immigrant to go back to his own country, spat in his face and threatened to slash him was sentenced to 90 days in jail and asked to write a 500-word essay explaining the challenges people face in starting new lives in the United States.

The Oregonian reports Harold Eugene Denson III pleaded no contest to unlawful use of a weapon and second-degree bias, a hate crime under Oregon law, for targeting the victim based on his national origin.

But in an unusual plea deal, a judge agreed to dismiss the bias charge if Denson writes the essay.

Denson has until late March to write the essay, otherwise he will be convicted of the bias charge and could face additional punishment.

Denson said he appreciated the opportunity.

He was arrested Aug. 25 after the incident with the victim, Artem Kutuzov, outside a VW dealership in Portland where Kutuzov works.

Investigators say the incident happened after Kutuzov walked up to Denson with a trash bag and a request that he pick up belongings that had spilled onto the dealership’s property. RGA

ADVERTISEMENT
Read Next
Pagasa: Typhoon Kammuri likely to have ‘direct effect’ on SEA Games venues
EDITORS' PICK
SMDC The Good Guys on the Go
COOCAA TV Bounce Back Sale offers up to 50% off
Anti-terror bill approved with no changes in ‘unconstitutional provisions’
PhilHealth cuts cost of COVID-19 test
Cherry Mobile teams up with Cloud Panda PH, launches online store
DOH hit over delayed health workers’ benefits
MOST READ
It’s final: Anti-Terror Bill now only needs Duterte’s signature
‘She had no right to be in Singapore’: Youth pleads guilty to abusing Filipino maid
MMDA says no to pop-up bike lanes
151 foreigners held after raid on illegal POGO firm in Quezon City
Don't miss out on the latest news and information.