More than 5,000 measles deaths in DR Congo this year — WHO 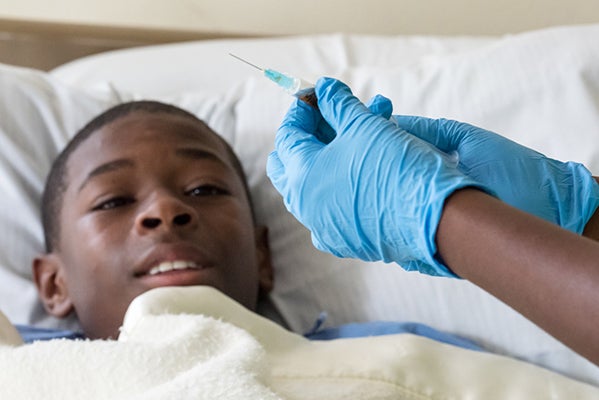 Measles has killed more than 5,000 people in the Democratic Republic of Congo (DRC) since January — more than double the toll in the country’s Ebola epidemic — the World Health Organization (WHO) said Wednesday.

“The DRC (measles) outbreak is the largest outbreak worldwide. It is one of the largest that we have seen,” Kate O’Brien, director of the WHO’s immunization department, told reporters in Geneva.

DRC declared its latest measles epidemic in June, and in September the country launched an emergency vaccination campaign to counter the outbreak. WHO said that the campaign was still ongoing, but was expected to be completed by the end of the year.

O’Brien said the epidemic was still “all over the country,” pointing out that most of those affected were “children and babies.”

Measles is a highly-contagious disease caused by a virus that attacks mainly children. The most serious complications include blindness, brain swelling, diarrhea and severe respiratory infections.

The rapid spread of measles in DRC has garnered far less attention than the Ebola epidemic that has also been raging in the east of the country since August 2018. That outbreak has killed some 2,200 people.

Ian Norton, at WHO’s emergency medical team unit, said the United Nations agency had begun training some of the Ebola teams in DRC to also manage measles cases, “because there is such a large burden.”

Efforts to rein in the spread of both Ebola and measles are meanwhile being hampered by violence and unrest across the country, and especially in the east.

On Tuesday, WHO said it had moved 49 Ebola-response staff out of the eastern town of Beni as insecurity in the area surged.

Ninety-four civilians in the Beni area have been killed by armed groups since Nov. 5, following the launch of an offensive by the country’s army, according to the Congo Research Group (CRG), a not-for-profit organization.

“The Ebola response is being hampered by the insecurity,” Norton told reporters.

“The same can be said… for the measles response, not just in Beni but across the entire country,” he said.

Attacks, even when not directed at medical staff or facilities, can block health workers from getting to work, and can prompt people feeling ill to stay home instead of seeking help.

Norton said the WHO was “extremely worried” by the growing insecurity, warning it had a dire “impact on the management of disease.” RGA